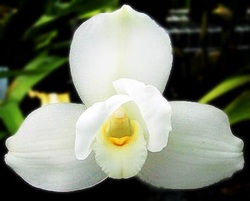 The wild White Nun, rarest and loveliest
Of all her kind, takes form in the green shade
Deep in the forest. Streams of filtered light
Are tapped, distilled, and lavishly expressed
As petals. Her sweet hunger is displayed
By the labellum, set for bees in flight
To land on.  In her well, the viscin gleams:
Mesmeric nectar, sticky stuff of dreams.
This orchid’s sexual commerce is confined
To flowers of her own class, and nothing less.
And yet for humans she sends so sublime
A sensual signal that it melts the mind.
The hunters brave a poisoned wilderness
To capture just a few blooms at a time,
And even they, least sensitive of men,
Will stand to look, and sigh, and look again,
Dying of love for what does not love them.
Transported to the world, her wiles inspire
The same frustration in rich connoisseurs
Who pay the price for nourishing the stem
To keep the bloom fresh, as if their desire
To live forever lived again through hers:
But in a day she fades, though every fold
Be duplicated in fine shades of gold.
Only where she was born, and only for
One creature, will she give up everything
Simply because she is adored; and he
Must sacrifice himself. The Minotaur,
Ugly, exhausted, has no gifts to bring
Except his grief. She opens utterly
To show how she can match his tears of pain.
He drinks her in, and she him, like the rain.
He sees her, then, at her most beautiful,
And he would say so, could she give him speech:
But he must end his life there, near his prize,
Having been chosen, half man and half bull,
To find the heaven that we never reach
Though seeking it forever. Nothing buys
Or keeps a revelation that was meant
For eyes not ours and once seen is soon spent:
For all our sakes she should be left alone,
Guarded by legends of how men went mad
Merely from tasting her, of monsters who
Died from her kiss. May this forbidden zone
Be drawn for all time. If she ever had
A hope to live, it lies in what we do
To curb the longing she arouses. Let
Her be. We are not ready for her yet,
Because we have a mind to make her ours,
And she belongs to nobody’s idea
Of the sublime but hers. But that we know,
Or would, if it were not among her powers
Always across the miles to bring us near
To where she thrives on shadows. By her glow
We measure darkness; by her splendour, all
That is to come, or gone beyond recall.
-- New Yorker, July 27, 2009