A Gyre from Brother Jack 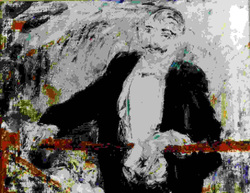 The canvas, called A Morning Long Ago,
Hangs now in Dublin’s National Gallery
Of Ireland, and for capturing the flow
Of life, its radiant circularity,
Yeats painter leaves Yeats poet beaten flat.
I hear you saying “How can he say that?”
But look. Here is the foyer of a grand
Theatre. It is always interval.
On the upper level, brilliant people stand.
What they have seen inside invests them all
With liquid light, and some of them descend
The sweet, slow, curving, anti-clockwise bend
Of staircase and go out into that park
Where yet another spectacle has formed:
A lake made bright by the oncoming dark.
And at the left of that, white wings have stormed
Upward towards where this rondeau begins.
Birds? Angels? Avatars? Forgiven sins?
He doesn’t say: the aspect I like best.
William had theories. Jack has just the thrill.
We see a little but we miss the rest,
And what we keep to ponder, time will kill.
The lives we might have led had we but known
Check out at dawn and take off on their own
Even as we arrive. Sad, it might seem,
When talked about: but shown, it shines like day.
The only realistic general scheme
Of the divine is in this rich display –
Proof that the incandescent present tense
Is made eternal by our transience.