To Anthony Thwaite at Fifty 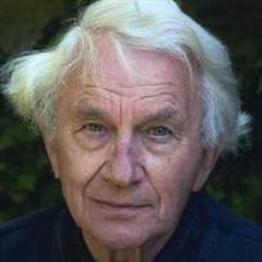 Great folly it is to be afraid of death, since all of us alike must pay that debt.
- Aristophanes

​Well, Anthony, by now the secret’s out
Of what this book is really all about.
The heavyweights have weighed in in your praise
With mighty line and lapidary phrase
Whereby both life and death are shown to be
Imbued with enigmatic majesty.
To celebrate your fifty years of life
The top scribes have been lined up by your wife
To send in something serious, hard-bitten,
Heart-felt and (with a good nib, please) handwritten,
These separate contributions to be sewn
Into a book which for its names alone
Should leave the average Festschrift looking bleak
And knocked into the middle of next week,
A synergistic donativum that
Should knock all others into a cocked hat.
With such wits to evoke the stern advance
Of Kronos I don’t think I stand much chance
Of adding anything in that respect.
Monuments of unageing iltellect
Have doubtless flooded in, all calculated
To leave you feeling slightly devastated
At how your trim form must perforce disperse
Eventually into the universe,
With random fragments of the quondam you
Attached to wisps of mist and drops of dew.
This leaves me feeling somewhat overparted
And vaguely wondering how to get started,
As well as worried that I’ve made a gaffe
By using this clapped-out Rapidograph
Instead of the italic pen or quill
Appropriate to orthographic skill:
The marks that this thing makes look thin and pale
And all in all I think I’m doomed to fail.
For deep thoughts and grave words I have no touch.
Qu’allais-je faire dans cette galère? Not much.
But why feign fear at what one does not see?
There might be virtue in necessity.
The grim view, though it must be the initial one,
Needs complementing from the superficial one.
Even to echo Horace’s Eheu
Fugaces I would have to find it true
And I just don’t. I like the way the years
Elapse, or anyway I shed few tears.
Perhaps I lack the mental wherewithal
To face the fact that one day night must fall.
Perhaps in smiling at it I’m ignoring it
When what I should be doing is deploring it.
But is one owning up to a soft head
Merely because one’s not consumed by dread,
And even finds a strange kind of relief
In hearing, far off, surf roar on that reef
To which, Lucretius says, all things must tend,
Exhausted by the flow of time? We end,
Said Pushkin, to make way for a fresh start
By others: let the newborn give us heart.
‘They crowd us from the world,’ he wrote, but not
As one who, scared of losing what he’s got,
Has really nothing very much to say
Beyond timor mortis conturbat me –
He simply found it just, and not just certain.
The play of life should have a final curtain.
(In his case it fell on him like a ton
Of bricks right in the middle of Act One,
Which put the mockers on his flood of song –
But still I think he was more right than wrong.)
‘Death joins us to the great majority,’
Droned Edward Young. No quarrel there from me.
‘Age,’ Bacon burbled, ‘will not be defied.’
A boring thought that will not be denied,
For fatalism, even as a platitude,
Remains the only reasonable attitude,
While if compounded with inventive verve
Its realism thrills your every nerve,
And has done since the Iliad was composed
(In braille – a fact not commonly disclosed).
Some thug on one of Homer’s battlefields
Lifts up his voice above the bonging shields
And what he bellows takes away your breath –
And when you get it back you laugh at death.
‘The race of men,’ he half exults, half grieves,
‘Is like the generations of the leaves:
They fall in autumn to return in spring.’
A sentiment I find most heartening –
As did, no doubt, the chaps he yelled it to,
And dropped their guard. (And then he ran them through.)
The duty you called ‘valuing the dust’
In your fine book Inscriptions (which I must
Say makes some of our newer bards look tired
Before their time, as well as uninspired)
Remains plain. As that Irish fellow says,
Man is in love and loves what vanishes –
Except he left out one important thing:
A wise man learns to love the vanishing.
Good humour is the mark of those who do,
A virtue highly manifest in you –
Which might sound like an insult to all those
Who think a poet should write about crows
In tones undeviatingly devoid
Of any hint that life’s to be enjoyed.
So, Anthony: grow old along with me
And all your friends. The best is yet to be,
Simply because it hasn’t happened yet,
And what’s to come we never can forget.
It stays sweet till we get to it, at least;
The only wonder that has never ceased –
And that’s a fact as certain as my name’s
(This line I’ll have to pad a bit) Clive James.