A Paean for Peter Porter 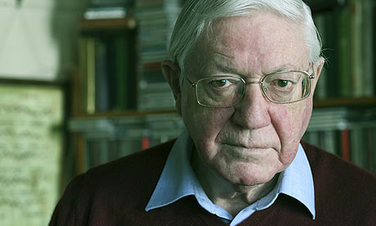 To mark his seventieth birthday

The sound of breaking glass in Germany
Was still ten years ahead when he was born.
In Brisbane the mass threat to sanity
Was white ants trekking in across the lawn
To bring the house down very gradually
As elves might masticate the Matterhorn –
Yet somehow that small noise of steady chewing
Served to forewarn him something big was brewing.

He grew up in a little world elsewhere
By weeks at sea from Europe torn apart,
And yet by some strange process he was there:
That distant anguish helped to form his heart.
The endless damage no prayers could repair
Was his to mourn, and thus in his own art,
Which would evoke the wealth of what was lost,
Assess its value and so count the cost.

The armies of Japan were brought up short
A few hours north while he did well at school
In English but did not excel at sport.
Bronzed Aussies brilliant in the swimming pool,
Gods of the cricket pitch and tennis court,
Marvelled at one who, clearly not a fool,
Rather than limping home thick-lipped and bleeding
From rugger could prefer to waste time reading.

For him the books in an unbroken line
Stretched from the lliad to Auden’s new
Slim volume, title vertical on the spine.
He wolfed the whole lot down as bright boys do.
Even of Christendom the grand design
Was what men wrote and painted. In his view
Art outranked faith and of all arts above
Stood music, his first-found and life-long love.

Most of the paintings he had not yet seen
Except in reproduction. The far side
Of the planet still help poems that would mean
A great deal to him but would stay tongue-tied
Until he got there. Music, though, came clean:
There were no secrets it knew how to hide.
The records spun unfazed save by the fluff
That choked the needle. Music was enough –

Enough to tell him that no national dream
Cancels the universal yesterday.
There are no fresh beginnings. Even the scream
Of rampant Lucifer can’t scrape away
That stateless stateliness, that seamless seam
Of treasure all may share yet none can pay
Into a bank or claim for ideology
Save through poor taste backed up by bad psychology.

Like Thomas Mann in exile, every night
He would be drawn back through the gramophone
Into a culture at its blazing height,
A forge with a blast-furnace set in stone
Whose double flame of Schwung and Sauberkeit
Yet burned, but by this afterglow alone:
The Architect of Pandemonium
Had blown the whole shebang to Kingdom Come.

All too aware the Schubert string quintet
In C’s adagio moving him to tears
Had done the same for Mengele, he yet
Grasped with a strength of mind beyond his years
The salient fact doomsayers still forget:
Great music has no morals. He who hears
And weeps, though he might be a lunatic,
Comes sick to it, is not by it made sick.

That the arts made sense but had no sense of duty
Save to themselves was not a cosy notion
In a nation feeling its raw natural beauty
Could use a touch of home-brewed body lotion.
Così fan tutte through to Tutti Frutti,
Too much had been brought in across the ocean:
Cringing Australia ought to stand up straight.
He saw their point but could not fight his fate.

For some are born to stay and some to go,
And some of those who go will stay away
Always, and even then will never know
Quite why the urge came over them that day
To up stakes. Though in those days Room to Grow
Remained a good excuse, still we can say
When a man thinks even Paradise can’t hold him
The inner voice lies very deep that told him.

The world he sailed to was already gone.
He was a spaceman travelling to a star
That had gone nova. Bits of it still shone
When he arrived, but only showed how far
And wide the old coherent synchrotron
Had flung its shards. He was an avatar
Cast as a revenant sent to reveal
Die Welt von Gestern ruined but still real.

In London he wrote poems whose modernity
(Trendies in Chelsea boots, blondes in fast cars)
Was peppered with the pet names of eternity:
Gluck, Goethe, Goya, all the Eurostars –
The list long but he didn’t need to learn it. He
Saw Botticelli’s Venus eat Mars Bars
In his mind’s eye, and heard the Tyburn axeman
Sharpen his tool in letters from the tax man.

And through this macédoine lurched his persona
Choked by a suit too cheap and loved too little –
Beside the merest Morris Minor-owner
Unpropertied, prospects of tenure brittle.
Half Mr Hulot, half Hancock’s Blood Donor,
In the King’s Road not a jot of well-born tittle
Bobbed near enough to defuse the intense
Desire made worse by his aesthetic sense.

Strange to relate, it was that very store
Of learning that his Grub Street denigrators
Pounced on. An upstart from the fatal shore
Was welcome to complain how the bomb craters
And tower blocks by Wimpey and Charles Clore
Had made a Horlicks of the gas and gaiters,
But dragging in Van Gough, Van Eyck, Van Dyke . . .
Vans by the van-load! That they didn’t like.

His range of reference struck them as pretension,
A nervous self-display of erudition
Designed to give a scholarly dimension
To the insecurity of his position.
The most he could expect was a suspension
Of sentence pending clear signs of contrition:
An anxious misfit self-taught Outback highbrow
To whom the best response was a raised eyebrow.

True lovers of his work, though, recognized
A man not up on stilts but on his knees
In thanks for how tradition civilized
An age of overpaid performing fleas.
The background noise his critics patronized
Was just the murmur of fond memories:
For him the great things that had been achieved in
The past were what he lived by and believed in.

Collections multiplied, his fame increased,
His place in serious verse was undisputed,
But even as in England carping ceased,
Back in Australia it was scarcely muted.
He stood accused of, at the very least,
The floating loyalty of the uprooted.
‘The Poms have conned the bastard,’ they droned chippily,
‘The way they’ve conned us ever since Gallipoli.’

The truth, of course, was the exact reverse.
He’d helped to give his country what it craved:
National Identity, which is a curse
When tubs are thumped and any flag that’s waved
Must first be redesigned to spite our nurse.
It could be said, if pride needs to be saved,
Expatriates are proof Australia Fair
Advances with exuberance to spare.

The Australian Spirit, if there’s such a thing,
Stays with our envoys who abide abroad.
Melba could swear as well as she could sing
And Errol Flynn made fun of his drawn sword.
Bradman did not kowtow to meet the King,
Nor bridle, but just struck the common chord.
Bred in the bone, that unassuming ease
Has always done things for us Overseas.

Mark Philippoussis serves a Mach 1 ace.
Dame Edna stars again in the West End.
Kylie Minogue with her new sultry face
Is still the girl next door or her best friend.
All are ambassadors for the Good Place
Where birth means nothing and to buck the trend
Of history is a man’s God-given right,
Like getting rat-arsed drunk on Friday night.

That national cast of mind helps him endure,
Though often in his poems he denies
Its force and plays a character less pure –
Racked by cupidity, stabbed through the eyes
By sexy promises of a quick cure
For envy’s canker. So the poet lies
About himself to tell a greater truth
About an age uncultured and uncouth.

The man behind the mask through which the voice
Talks like a Tragic chorus has a soul
Less fearful. He does what he does from choice:
It is by self-denial he stays whole.
Though BMW may buy Rolls-Royce
And any goalkeeper may sell his goal,
This man, albeit that the cost is grim,
Lives for his art, as his art lives through him.

The land on whose cold shore he burned his boats
Decrees a Cool Britannia pleasure dome.
Schools have no place for anyone who quotes
Latin, or knows why all roads led to Rome.
The Princess on her raft of flowers floats
To Avalon, the only fitting home
For beauty in an era whose salacity
He guessed would outstrip even its rapacity.

Less fraught with danger than weighed down with tat,
Ours was an epoch ripe for mordant wit
Like his, but he’s done so much more than that:
Through his epistulae ex ponto flit
The singing ghosts who leave us sounding flat.
His fugue grows sad, but there’s no help for it –
The play-out music of a patriarch
Is often Bach but seldom Offenbach.

​It’s time. What he won’t say himself let’s say
On his behalf, though he blush at our boast:
His friends love him, and none, home or away,
Would not be proud as Punch to play the host
At this world-girdling feast for his birthday,
Thus to propose a heartfelt double toast –
God bless a man who had so much to show us
We should thank God he found the time to know us.