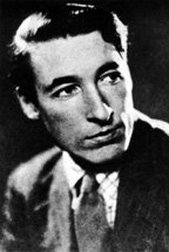 As is only proper, we go on forever hearing about W.H. Auden. But we never hear enough about his friend Louis MacNeice, although there were things MacNeice could do that even the prodigiously facile Auden could not. One of them was Autumn Journal, my favourite long poem of the 1930s, an intoxicating cocktail of classical metres, conversational rhythms and reportorial detail. There is no long poem like it for its concentration of the pre-war atmosphere. But there are short poems that give the same flavour of threatened tranquillity, and most of those, too, are by MacNeice. The pick of the bunch is ‘Meeting Point’, which the poet included in the 1936-1938 section of his Collected Poems 1925-1948. (It’s the ‘collected’ to have, if you can find it second-hand: the later, posthumously edited one weighs like a tomb-stone.)

‘Meeting Point’ is the poem that every young man should learn to recite by heart if he wants to pull classy girls, and every classy girl should have on the tip of her tongue when she bumps into a scruffy poetic type that she feels the urge to civilize. ‘Time was away and somewhere else’ runs the refrain. The two lovers are alone together in a public place. It’s a coffee shop, expensive enough to have a waiter, but fortunately he does not show up to interrupt them. (‘The waiter did not come, the clock/Forgot them and the radio waltz/Came out like water from a rock.’) By the power of their combined imaginations, the little table in between them becomes all the world. (‘The camels crossed the miles of sand/That stretched around the cups and plates…’)

The camels remind you of Auden’s reindeer in ‘The Fall of Rome’, but MacNeice’s vision of the faraway animals comes from his close-up on the human beings in their prosaic local setting. Compounding achingly self-conscious gentility and torrential lyricism, he has precisely tapped into the perennial British conviction (stand by for Brief Encounter) that heterosexual love between adults should reach its emotional apotheosis at a public meeting point where the most intense thoughts must stay unspoken, with the world crowding around to stifle the passion. Trevor and Celia, though, are nowhere beside these two. There was never a more burningly focussed romance, so vast a drama with so few props. (‘There were two glasses and two chairs/And two people with the one pulse…’) Almost fifty years have gone by since I first read the poem, and it still thrills me to bits. If you can find a copy of that excellent Penguin anthology Poetry of the Thirties, edited by Robin Skelton, you can see what the poem looks like alongside some of its competition. There is some terrific stuff there, but ‘Meeting Point’ still reaches out: a Brief Encounter without Rachmaninov, but with its own, tenaciously lingering music.