To Pete Atkin: a letter from Paris 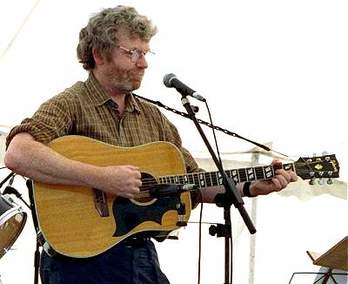 Trapped here in Paris, Pete, to shoot some scenes
Which end a film that’s tied me up for weeks,
I’ve lost track of what what I’m doing means.
The streets of the Étoile are filled like creeks
By driving rain that blinds our fine machines.
We squat indoors, unprepossessing freaks
Made up as rough-cast hoboes of both sexes,
Surrounded by sun-guns and Panaflexes.
​
Our schedule’s gone to Hades. Meanwhile you
Have gone to Scotland there to make the rounds
Of clubs and halls to introduce our new
Collection of low-down yet highbrow sounds –
A sacrifice I hail. And so, in lieu
Of calls that would be tricky and cost pounds,
I’m scrawling you this missive in ottava,
A form I like like Fields like Mocha-Java.

That Byron incarnates Don Juan in it
Should make it suicide to use again.
This note would end before I could begin it
Were I to dwell on that least pinched of men
(Who turned these stanzas out at two a minute)
And bring to mind the splendour of his pen,
The sheer élan, the lift, the loose-limbed jollity –
Yes blue – but true blue, right? Legit. Star quality.

A strength that helps to prove these verse-form shapes
(Homespun or else, like this one now, imported)
Are far from being decorative drapes
Deployed to prettify some ill-assorted
Conceptions best half hidden: the gap gapes
Between the thought and deed (and drawn and quartered
Lies your result) if that’s your estimation.
These strict schemes are a kind of cogitation

In their own right. Without them, no real thinking
Beyond the surface flotsam in the skull
Can happen. It takes more than steady drinking
To stop creative writers being dull.
Their gifts they’ll soon find upside down and sinking
If discipline has not first keeled the hull.
For all true poets rhyme must equal reason
And formlessness be just a form of treason.

So no surprise you were the man for me,
Though others sang with much more cute a voice.
Approval was no matter of degree
But absolute. There was no other choice.
Our linking up was pure necessity,
As certainly as Rolls had need of Royce.
I viewed you, while the Footlights shouted Encore,
The way one Goncourt viewed the other Goncourt.

This kid, I mused, knows how to grasp the nettle.
With him the formal urge is automatic.
He’s lamped the fact that only heat moulds metal
Or pressure makes the lyrical dramatic.
One’s syllables would soon attain fine fettle
If tethered to his notes, be less erratic;
One’s lexical pizzazz avoid fatuity
Attached to that melodic perspicuity.

We met, we talked of Bean and Brute and Bird
And Rabbit. You were full of praise for Trane.
We both thought early Miles had had the word
But (now I know this went against the grain)
I thought he later lost it. Had I heard
Of Archie Shepp? Yes. Good? No. Right: inane.
Our views were close, and on one salient thing
Inseperably united – Duke was King.

Of ‘Main stem’, ‘ “C” Jam Blues’ and ‘Cottontail’,
Of ‘Take the “A” Train’, ‘In a Mellotone’
And ‘Harlem Air Shaft’ we took turns to wail
The solos so definitively blown
By sidemen somewhere in the age of sail –
The pre-war Forties, when Duke stood alone,
His every disc a miniature immensity,
The acme of schooled ease and spacious density.

It soon turned out you thought post-Presley pop
As real as jazz. This wheeze was new to me
And caught my sense of fitness on the hop:
I loved the stuff, but come now, seriously . . .
Hold on, though. My beliefs howled to a stop
And chose reverse. With one bound, Jack was free.
If rock struck me as fruitful, lively, good –
Why not get in and gain a livelihood?

The Broadway partnership of words and tune
Had been dissolved by pop, which then reverted
In all good faith to rhyming moon with June,
Well pleased with the banalities it blurted.
Those speech defects would need attention soon.
Gillespie and Kildare, in aim concerted,
We got started . . . but enough now in that strain:
The whole a.m. has just gone down the drain.

I’m sure the cost of sitting here is frightening
And days ago it ceased to be much fun.
Though, as we lunch, the sky might just be lightening:
This afternoon we could get something done.
And now the outlook’s definitely brightening,
So more from the location. I must run.
We’ve just been told to grab a cab and ride out
To some guy called Quatorze’s country hideout.

The weather’s cleared. We’re filming at Versailles,
Palatial residence of Sun King Louis,
Where everything is landscaped save the sky
And even that seems strangely free of pluie
For this one day at least. I find that I
Am sneakily inclined to murmur ‘phooey’
When faced with all this Classical giganticism:
In fact it almost makes me like Romanticism.

Proportion, yes: the joint’s got that to burn.
Sa regularity of window arch,
Ses ranks of cornucopia and urn.
Those balustrades like soldiers on the march!
Those gardens, haunt of robot coot and hern!
The whole confection fairly reeks of starch:
A dude ranch frozen with neurotic tension,
It chills the very notion of dissension.

And that was what le Roi Soleil was after,
Without a doubt. His absolutist frown
Is there is every pediment and rafter,
A stare of disapproval beating down
Propensities to any form of laughter
Beyond the courtly hollow kind. The Crown
Made sure to keep this four-star barracks filled
With dupes who thought they danced but really drilled.

Grim-jawed solemnity may have its worth
But geniality is just as serious
And gravitas is half deaf without mirth.
I don’t mean one should roll around delirious
But art must take the air, not hug the earth –
Authoritative needn’t mean imperious.
To preach cold concepts like the golden section
Is over-mightily to seek perfection.

We should be glad, then, that we work in rock
Whose mark for ordered symmetry is zero.
Its cognoscenti, talking total cock
Concerning slack-mouthed bitch or dildoed hero,
Combine the thickness of a mental block
With all the musicality of Nero:
And yet despite their IQs in two figures
They’ve sussed out where the only decent gig is.

In liking anti-intellectualism
They’re wrong, but right to value simple verve.
A long way gone in pale eclecticism,
Like all those nostrums that no longer serve
(Vedanta, Social Credit, Pelmanism)
The classical succession’s lost its nerve –
Or else it shrieks an avant-gardist foolery
That makes the average rock song shine like joolery.

But here the shine’s gone off a hard half-day:
We’re wrapping up with no shots left to do.
Inside a camera car I’m borne away
Along a six-lane speedway to St Cloud,
Where signboards set to lead non-Frogs astray
Now send us back Versailles-wards. Sacray bloo.
Our pub will keep a meal, though . . . Bloody Hell!
No food: we have to work tonight as well.

Throughout the evening’s shooting in Pigalle
I marvel, as the red lights glow infernally,
That they can pull down places like Les Halles
When (rain or shine, nocturnally, diurnally,
Uncaring if you snigger, sneer or snarl)
Grim tat and tit dance cheek by jowl eternally
In this dump. What a drag! But its survival
Is no surprise if taste’s its only rival.

Alone at last, I’m much too tired to sleep
(A hemistitch from Lorenz Hart. You tumbled?)
The drapes down-soft, the wall-to-wall knee-deep,
My hotel bedroom ought to leave me humbled.
By rights I should conk out without a peep,
But can’t. The boys who did the décor fumbled:
It’s just too scrumptious to be borne, too peachy.
They’ve ladled on an acre too much chichi.

The Gauche and not the Droite’s the Rive for me.
To kip beneath plush quilts is not the same
As gazing sur les toits of that Paree
They fly behind the garret window frame,
Heraldic as France Ancient’s fleur-de-lys,
To charm you through Act I of La Bohème –
Unless I’ve got Parnasse mixed up with Martre.
(You know I still can’t tell those Monts apartre?)

So much for taste, then, and the same goes double
For those more recent phantoms, such as Youth.
As clear and brilliant as the tiny bubble
That canopies a baby’s first front tooth,
There swells through times of sloth and troughs of trouble
The artist’s one eternal, guiding truth -
Ars longa, vita brevis. Is that Horace?
It could be someone weird, like William Morris.

I’m writing halfway up the Eiffel Tower
While knocking back a rich café au lait.
We’ve been at work this high about an hour
And here my part will end, at noon today.
It gives a heady, Zeus-like sense of power
To watch, from au-dessus de la mêlée,
The myriad formiculant mere mortals
Who circumvest this crazy structure’s portals.

Much earlier, and lovely in the dawn,
The gardens of the Louvre were full of mist.
The Tuileries lay like a smoking lawn
As I, my trusty notebook in my fist,
Saw Paris come unfolded like a fawn
And glitter like a powdered amethyst –
Whereat I felt, involved in her fragility,
A thumping streak of tough bitch durability.

We’re all aware of how the continuity
Of Western culture’s frazzled to a thread.
It doesn’t take a soothsayer’s acuity
To see the whole shebang might wind up dead.
One’s sorely tempted to, in perpetuity,
Give up the struggle and go back to bed:
And yet Tradition, though we can’t renew it,
Demands we add our certain something to it

No matter what. I leave form Charles de Gaulle
At Roissy this p.m. S-F HQ!
The planes feed in a cluster, like a shoal
Of mutant carp stuck nose to nose with glue
Around a doughnut in whose abstract hole
Aphasic humans escalating through
Translucent pipelines linking zones to domes
Seem pastel genes in giant chromosomes.

And that’s the future, baby. Like the past
It’s flowing, but unlike it it flows faster.
Ici Paris, below me. Will it last?
A heap of ageing bricks and wood and plaster –
Bombe glacée with one atomic blast.
A single finger’s tremble from disaster.
But then, who isn’t? So what else is new?
See you in London: there’s a lot to do.
Copyright © 2019
​Built & managed  By Dawn Mancer