To Martin Amis: a letter from Indianapolis 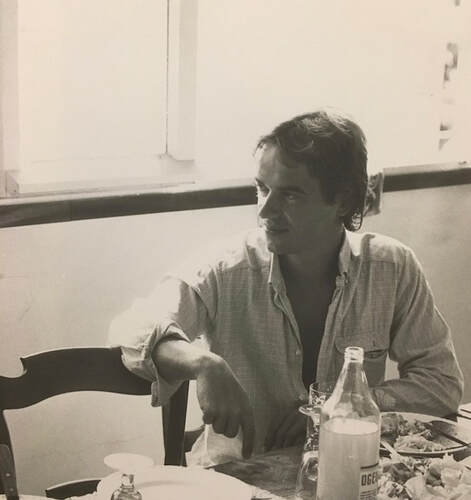 Dear Mart: I write to you from a magic spot.
The dullsville capital of Indiana
At this one point, for this one day, has got
Intensity in every nut and spanner.
Soon now the cars will sing their vast Hosanna
And pressure will produce amazing grace.
Drake-Offenhauser! A. J. Foyt’s bandanna!
Velazquez painting Philip at the chase
Saw something like these colours, nothing like this race.


Ten thirty. Half an hour before the start.
The press-box at the Brickyard is up high.
We sit here safely, emperors set apart,
And kibbitz down as those about to die
Cry Morituri . . . Yes, but so am I,
And so are you, though not now. When we’re older.
Where death will be the last thing we defy,
These madmen feel it perching on their shoulder:
The tremble of the heat is tinged with something colder.
​
But that’s enough talk about the weather.
To rail against the climate’s not good form.
My subject ought to be the latest feather
Protruding from your cap. I mean the Maugham.
I offer you, through gritted teeth, my warm
Congratulations on another coup.
Success for you’s so soon become the norm,
Your fresh young ego might be knocked askew.
A widespread fear, I find. Your father thinks so too.

The prize’s terms dictate an expedition
To distant lands. That makes you Captain Kirk
Of Starship Enterprise. Your Five-Year Mission:
To Boldly Go etcetera. You can’t shirk
The challenge. This award’s not just a perk:
Queer Maugham’s £500 are meant to send
Your mind in search of fodder for your work
Through any far-flung way you care to wend.
Which means, at present rates, a fortnight in Southend,

So choosing Andalusia took nerve.
It’s certainly some kind of foreign part.
A bit close-flung, perhaps, but it will serve
To show you the left knee, if not the heart,
Of European Culture. It’s a start.
Like Chesterfield advising his young son
(Who didn’t, I imagine, give a fart)
I’m keen to see your life correctly run.
You can’t just arse around forever having fun.

The day’s work here began at 6 a.m.
The first car they pumped full of gasoline
And wheeled out looked unworldly, like a LEM.
A Mass was said. ‘The Lord is King.’ The scene
Grew crammed with every kind of clean machine.
An Offenhauser woke with shrieks and yells.
The heart-throb Dayglo pulse and Duco preen
Of decals filled the view with charms and spells
As densely drawn and brilliant as the Book of Kells.

borg. warner. bardahl.  ‘Let the Earth rejoice.’
‘May Christ have mercy.’ lodestar. olsonite.
America exults with sponsored voice
From Kitty Hawk to ultra-Lunar flight.
raybestos. gulf. Uptight and out of sight!
The Cape. bell helmets. Gemini. Apollo!
Jay Gatsby put his faith in the green light.
Behold his dream, and who shall call it hollow?
What genius they have, what destinies they follow!

The big pre-race parade comes down the straight
While hardened press-men lecherously dote
On schoolgirl majorettes all looking great
In boots and spangled swimsuits. Flags denote
Their provenance. The band from Terre Haute
Is called the Marching Patriots. Purdue
Has got a drum so big it needs a float.
And now the Dancing Bears come prancing through,
Their derrières starred white and striped with red and blue.

From Tucson, Kokomo and Tuscaloosa,
From over the state line and far away,
Purveying the complete John Philip Sousa
The kids have come for this one day in May
To show the watching world the USA
Survives and thrives and still knows how to cock its
Snoot. Old Uncle Sam is A-OK –
He’s strutting with bright buttons and high pockets.
Hail, Tiger Band from Circleville! Broad Ripple Rockets!

Objectively, perhaps, they do look tatty.
This continent’s original invaders
Were not, however, notably less ratty.
Torpedoes in tin hats and leather waders,
Hard bastards handing beads around like traders –
Grand larceny in every squeak and rattle.
The whole deal was a nightmare of Ralph Nader’s
A corporate racket dressed up as a battle:
The locals kissed the Spaniard’s foot or died like cattle.

The choice between the New World and the Old
I’ve never found that clear, to tell the truth.
Tradition? Yes indeed, to that I hold:
These bouncing brats from Des Moines and Duluth
Seem short of every virtue except youth.
But really, was there that much more appeal
In stout Cortez’s lack of ruth and couth
Simply because it bore the papal seal?
It’s art that makes the difference, and Art means the Ideal:

Velazquez (vide supra) for example.
You’re visiting the Prado, I presume?
Well, when you do, you’ll find a healthy sample
Abstracted from his oeuvre form womb to tomb.
The key works line one giant, stunning room:
Group portraits done in and around the Court
Whose brilliance cleans your brains out like a broom.
Bravura, yes. But products, too, of thought:
An inner world in which the Kings ruled as they ought,

Not as they did. His purpose wasn’t flattery
Or cravenly to kiss the royal rod.
He just depicted the assault and battery
Of Hapsburg policies as acts of God,
Whose earthly incarnation was the clod
That currently inhabited the throne.
He deified the whole lot on his tod,
Each royal no-no, nincompoop and crone.
Great Titian was long gone. Velazquez was alone.

Alone, and hemmed about by mediocrities
(Except for once when Rubens came to town),
He must have felt as singular as Socrates
But didn’t let the pressure get him down.
He slyly banked his credit with the Crown
Until he was allowed a year abroad
(In Rome, of course. In Venice he might drown.)
To raise his sights by study. An award
The King well knew would be a hundredfold restored.

Conquistadores in their armadura
The drivers now are standing by their cars.
Unholy soldiers (but in purpose purer),
They look as if they’re shipping out for Mars.
It’s hard to tell the rookies from the stars:
When suited-up and masked, they seem the same.
White skin grafts are the veteran’s battle scars.
For A. J. Foyt the searing price of fame
Was branded round his mouth the day he ate the flame.

A year back young Swede Savage swallowed fire.
He took six months to die. It goes to show
How hot it is inside a funeral pyre
And just how hard a row the drivers hoe.
I can’t believe they’re in this for the dough.
The secret’s not beyond, but in, the fear:
A focal point of grief they get to know
Some other place a million miles from here –
The dream Hart Crane once had, to travel in a tear.

Eleven on the dot. The zoo gets hit
By lightning. Lions whelp and panthers panic.
The fastest qualifiers quit the pit
No more than hipbone-high to a mechanic
And take the track. The uproar is Satanic.
By now the less exalted have departed,
But still the sound is monumental, manic.
Librarians would hear it broken-hearted.
And this lap’s just for lining up. They haven’t started.

Around the speedway cruising on the ton
(Which means for Indy cars, they’re nearly stalling)
They blaze away like spaceships round the Sun –
A shout of thunder like Valhalla falling.
(I’m running out of epithets: it’s galling.
I’ve never heard a noise like this before.)
They’re coming round again. And it’s appalling –
The moment when you can’t stand any more,
The green light goes! Geronimo! Excelsior!

It’s gangway for the new apocalypse!
They’re racing at two hundred miles an hour!
The likelier contenders get to grips
Like heavy cavalry berserk with power
And three-time-winner Foyt already rips
Away to lead the field by half a mile
As up the ante goes. Down go the chips.
No one but Rutherford can match that style,
And he starts too far back. I’ll tell you in a while

The way it all comes out, but now I’ve got
To set this screed aside and keep a check
From lap to lap on who, while driving what,
Gets hits by whom or ends up in a wreck.
A half a thousand miles is quite a trek –
Though even as I’m jotting down this line
A.   J.’s got someone breathing down his neck . . .
Yes, Rutherford’s MacLaren, from row nine,
Has moved up more than twenty places. Heady wine!

Since Johnny Rutherford is from Fort Worth
And Foyt from Houston, they are Texans twain:
The both of them behind the wheel since birth,
The both of them straight-arrow as John Wayne.
This thing they’re doing’s technically insane
And yet there’s no denying it’s a thrill:
For something fundamental in the brain
Rejoices in the daring and the skill.
The heart is lifted, even though the blood may chill.

It’s some time later. On the victory dais
Glad Rutherford gets kissed and plied with drink.
It looks a bit like supper at Emmaus.
Unceasing worship’s damaging, I think:
One’s standards of self-knowledge tend to sink.
I’d like to try it, though, I must confess.
Perhaps a little bit. Not to the brink.
Nor would that heap of lolly cause distress:
Three hundred thousand dollars – not a penny less.

Until halfway, the prize belonged to Foyt.
His pretty gilmore racing ketchup-red
Coyote skated flatter than a quoit,
The maestro lying down as if in bed.
He only led by inches, but he led –
Until his turbo charger coughed white smoke.
The car kept running quickly while it bled,
But finally – black flag. For Foyt, no joke:
Unless he had his money on the other bloke.

The Coming Boy on his eleventh try
At winning the ‘500’ finished first.
A perfect journey. No one had to die.
On looking back, I think about the worst
Catastrophe was that an engine burst.
The empty Brickyard bakes in silent heat,
The quarter-million race-fans have dispersed,
And I have got a deadline I must meet:
I have to tell the story of the champion’s defeat.

Velazquez was ennobled in the end.
(Old Philip, fading fast, could not refuse
The final accolade to such a friend.)
His background was examined for loose screws
(Against the blood of craftsmen, Moors or Jews
Bureaucracy imposed a strict embargo)
And in a year so came the good news,
Together with the robes and wealthy cargo
They used to hang around a Knight of Santiago.

Encumbered thus, he sank into the grave.
The man is dead. The artist is alive.
For lonely are the brilliant, like the brave –
Exactly like, except their deeds survive.
My point (it’s taken ages to arrive)
Is simply this: enjoy the adulation,
But meanwhile take a tip from Uncle Clive
And amplify your general education.
There’s more than literature involved in cultivation.

Tomorrow in the London afternoon
I’ll miss your stubby, Jaggerish appearance
And wish you back in Fleet Street very soon.
Among the foremost ranks of your adherents
I’m vocal to the point of incoherence
When totting up your qualities of mind.
You’ve even got the rarest: perseverance.
A wise adviser ought to be resigned,
Unless he keeps the pace hot, to being left behind.

‘We’re given in Art in order not to perish
Faced with the Truth.’ Or words to that effect.
An apophthegm of Nietzsche’s which I cherish:
He sees how these two areas connect
Without conceding that they intersect.
Enough for now. Go easy, I implore you.
It all abides your questing intellect.
The Heritage of Culture, I assure you,
Like everything, you lucky sod, is all before you.
Copyright © 2019
​Built & managed  By Dawn Mancer