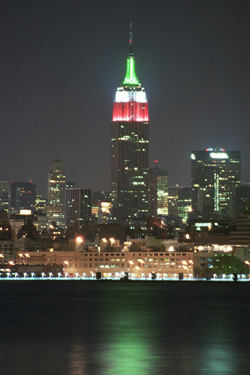 I’ve been giving the miraculous a whirl
but what have I got? A stomach crammed

with cheap chimichanga, a shoulder-check
from Christian Slater and, though I don’t know it yet,

a cloned credit card number. The Empire State
is a popsicle dipped in its Christmas reds

and greens. “Let’s eat and drink ourselves
into hospital.” The waitress only just

and flaming, straw-melting cucarachas.
We came to celebrate this town

but dragging ourselves up Seventh Ave.
back to the peeling Pennsylvania room,

we sway wasted and weary past
stacks of Japanese Playboys, Brazilian

to expect from the greatest city on earth.
And then this charcoal-on-cardboard sign,

See Saturn for a dollar, and the giggling line
of clubbers where a homeless astronomer

by Buster Crabbe. I toss a dollar in his cap
expecting nothing but empty night,
rest my brow against the rubber cup,
sealing out the street-level light

and there, in a black starless spotlight:
Saturn, as fat as a two pound coin,

fluxing with my pulse conducted through
the sensitive instrument, tilts its tipsy

rings towards Manhattan. I don’t want to leave
its impeccable silence but you’ve paid

your money too and I step aside.
A random reveller asks me, “Did you see it?

Is it real?” and “Was it in colour?”
You take your fill and turn away, smiling.

​We continue up the hill in silence,
our minds in parallel universes. 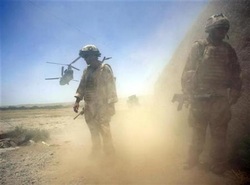 Came back from Kabul all wrong.
Didn’t stick around for too long
after that. Left the army and his mum
asking where her boy had gone.
Sold his kit and caboodle for a song
and worked the Pacific around to Hong Kong.
Took a postcard of Dunfermline along.
Can’t speak of those things in a foreign tongue
so he’s teaching a PADI course in Haiphong,
sleeps with his new wife and a handgun. 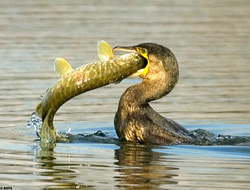 Teriyaki tigering the golden
deep fried flesh and a flask of hot sake
fuming like a factory chimney.

This china smoke stack takes me back
to failing mills and Warcar Reservoir:
the stagnant pond that used to juice them

before profit migrated East to the land
of synthetics, cheap worsted, cheaper labour.
The summer of Jaws and tucked up legs,

invented verrucas, sliding Sunday nights
down the gullet of the weekend bath:
feeling like Quint kicking at teeth, puking blood.

Pike were our local great whites but we had
no pike nets, pike repellent, strychnine jabs,
no Police Chief or ichthyologist.

We had hunks of drystone wall, giant bobbins,
window gaffs, rafts of unhinged doors,
to protect us from the monstrous fish

that Ted Hughes himself might have reared
and delivered overnight on the back
of a flat-bed lorry.

We knew the tale of the kid who dived
onto a rusting Cortina,
swam to the cobbles and bound up

his intestines in a pinkening towel
and almost made it home. But we knew
the pike had done it, though we watched

the council land the dribbling chassis
with a crane. We dared ourselves
back into the green water,

rafting down the overflow when it rained,
stooping under child-sized Niagaras,
leaping from the millstone-gritty walls.

I never saw a pike in the res
or in a keepnet and now I have one
in a dish, spit-roasted on a skewer,

​I’m sorry for its cooked-blind eyes,
seared-off fins, flaking muscle.
I take it apart with chopsticks. 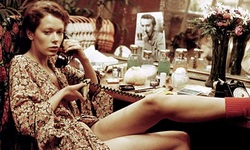 A draughty shoebox up on blocks,
Yorkshire Tea and terrier prints,
lived in just a year–
my dad’s caravan at Sand Le Mer
was on the market the month he died.
Leaky, salt-lashed, anonymous,
Beatles and brass band LPs
warping in the yearlong must,
a copy of Emmanuelle
and framed royalties from Radio Three.
His second divorce beached him here
and he couldn’t support his own weight,
and his dog gnawed the fur
from its paws for a year
and had to be given away.

Soho. Reading a book on grief
and a cocktail menu. Long Island Baby
blows me a kiss sticky with vodka,

Malibu, orange and cranberry juice,
her thighs a mile of white sand, her rock pool eyes
swarming with the many-limbed creatures

of desire. I long to join her
till I remember that Long Island foams
with sharks and the bones of whalers,

bobs with the drowned buoys of bloated bathers.
The cocktail shaker racket brings me back
to this sugar-ringed table and Soho Square in the rain.

It’s been two years, but when the barmaid sees
my watering eyes, I say “My father just died.”
Not fair on her, but then your death

has made me mean and I change my order
to a Rusty Nail. She nods but it’s clear
this is a new one on her.

She’s all Baileys and crème de menthe,
milk and cherries. Would you have gone for her?
Philandering was your one and only optimism.

Crushed ice and the flash of chrome
slash back my midnight horrors of you.
Black gloves, flesh mask, felt fedora. You stalk

me down Italian lanes and Yorkshire snickets,
lurk in my bedroom, shoes under the curtain,
ready with razor, garrotte, ice pick.

Before I wake, you dig your skewers
into my brain, teasing apart the folds and lobes,
the carpaccio of flesh and memory, until

​only the cocktail list can keep you at bay.
Two or three more and then, mio caro
assassino, you’ll be in the can. 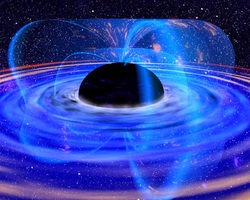 I heard at the heart of things
there’s a massive black hole.
Gigantically coy but given away
by x-rays and the teetering
of attendant stars.

​because I saw the universe
drain down the plughole,
swirl back through the disc of your eye
and all that was lost was reborn
in the still silent face by my side. 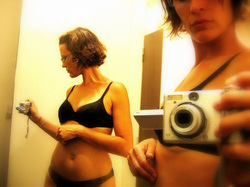 Traditionally, men will sit nearby in leather seats
or, in cheaper boutiques, on office surplus chairs.
Maybe flipping through Men’s Health or FHM
while wives and girlfriends try things on, with dutiful assistants
pinning hems or sighing Saturday girls clattering hangers
back on racks, snarling with rolling eyes that “There’s a queue.”
But I pick my angle through the door of the changing room
to watch your naked feet rehearse the dance of sliding in and out
of pants and dresses, shoes and blouses, garments slipping up and down
with now and then a little show-and-tell as you yank the curtain,
reveal with a frown a tightly-waisted purple gown
then back again to just the feet, the turning ankles, balancing acts,
as you crane your neck to see how this or that looks from the back
and even if these things are chosen more with him in mind than me,
I’m held by your displays in proud and silent ecstasies. 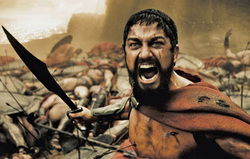 She rarely felt the need to apologise.
When she did, her contrition met with
exonerating pouts, enveloping hugs,
the nipping in the bud of any grudge.
I tried apologising to her once
after one of my turns, full of Armagnac,
spinning off the comet tail of Seroxat
or some such serotonin-shooting star.
No fear. Wouldn’t budge. Got nothing.
Email after email, Interfloral
interventions, quarter-hourly texts;
she would not forgive or forget. So,
her larynx remains bruised, her dining table
smashed, her kitten’s head the wrong way round. 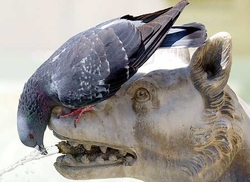 The airport has closed, the trains are frozen
to their tracks, the Alps cold shoulder me and drop

a winter’s weight of snow into my lap. With my grappa headache
I lounge on grammar books, flicking channels

and finding a rare programme free of hot pants, toupees,
wet t-shirts. On a map of old Europe I watch the habitats

of the grey wolf shrink. Shot, poisoned, built
out of existence and fucking up its DNA with the feral strays

of the towns padding into the countryside.
Mist bristles its coat against the French windows

and I’m off again, making a little sleep
to while away this time away from you while

the hotel car park disappears, the footprints of the Bergamaschi
are snuffed out for the day. You slip through a distant door,

your basket laden with casoncelli, yellow cakes with marzipan larks
pecking at the sponge, and a flask of local red–

for you when you tire, for her as she births into your snow-white
hands. The television wakes me to static blue

and I see you at the window, face floating in the mist, nails
scratching the glass, red lips fuller than of late.

​Your basket melts a patch of stone on the step,
stirs with the life inside. 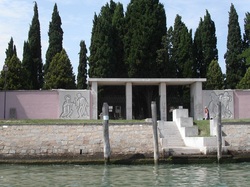 My Italian is a pocketful
of leftover euros. I use them up,
requesting return vaporetto tickets
to the island cemetery of San Michele.

The bigliettaio assures us that
it’s too soon to take the one-way trip.
Out on the breezy green lagoon, my mother
does her trick with shades and scarf that cuts

her age in half and has waiters mistake us
for husband and wife. The low-lying isle
of the dead drifts towards us.
Once through the portal we find celebrity slabs:

Stravinsky and Diaghilev, Pound obscured
by petals and dust. I place a pebble
on Brodsky’s stone, add a biro to the bristling
jar at its base. He’ll not be short of a pen

when new ideas come. But we’re not here
for photo-ops or grave rubbings.
We came to mingle with the Catholic mass,
to walk where the locals serry,

shoulder to shoulder in the soil. We pass
the plots of friars, sisters and soldiers;
so many sailors are wrecked here, their fingers
purchasing just enough to keep them above

the sea that is coming to take it all back.
The dot of the groundsman’s tractor grows
from the squint of an avenue’s
vanishing point. We see the plume of smoke

before we hear the engine of its steady
approach. A pair of golden ballet shoes
swivel en pointe at the corner of
a sun-bleached lid, alongside (N1982 – M1996)

and a photo propped, as if on a table top,
of a black-haired daughter pirouetting
for the local press on the white steps
of Santa Maria della Salute.

Mum has wandered off with a watering can
from the neat metal stand and is sprinkling
some flinching plants and flowers shrinking
from the heat. To reach her I must pass

a restful night, or is there an adamantine
pea of sin beneath the mattresses
of endless sleep? The tractor buzzes
in my ear; I can see the groundsman’s face.

She’s found a flotilla of tiny tombs
with baby snaps fading in the sun’s
nuclear stare. A crumpled face haloed
by knitted shawl; a hint of the old man

he might have become, but free of the decades
of graven care; his nato e morto
wrapped up in one year. “Read this for me.”
“La tua scomparsa così improvvisa

mi ha lasciato in uno sconcertante
dolore. Aiutami dal cielo
come mi hai aiutato in vita.”
“What did it say?” she asks. “Something like:

the way you were suddenly snatched left me
in bewildering pain. Help me from Heaven
as you helped me in life.” The groundsman
has lowered the trailing blades into the beds

and the tractor clatters past this baby Boot Hill
with its milk teeth stones and whole histories
cupped between the palms of a single day.
Cut grass stings our eyes.

​The boat ferries back the hundred years
we’ve amassed and which barely seem to displace
a molecule of water, or persuade
a single green weed to bend as we pass.
​
Copyright © 2019
​Built & managed  By Dawn Mancer