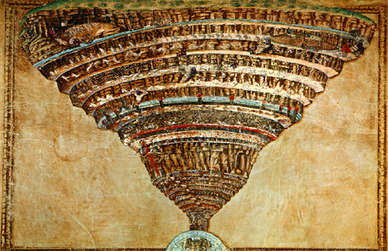 TO ENTER THE LOST CITY, GO THROUGH ME.
THROUGH ME YOU GO TO MEET A SUFFERING
UNCEASING AND ETERNAL. YOU WILL BE
WITH PEOPLE WHO, THROUGH ME, LOST EVERYTHING.

MY MAKER, MOVED BY JUSTICE, LIVES ABOVE.
THROUGH HIM, THE HOLY POWER, I WAS MADE—
MADE BY THE HEIGHT OF WISDOM AND FIRST LOVE,
WHOSE LAWS ALL THOSE IN HERE ONCE DISOBEYED.

FROM NOW ON, EVERY DAY FEELS LIKE YOUR LAST
FOREVER. LET THAT BE YOUR GREATEST FEAR.
YOUR FUTURE NOW IS TO REGRET THE PAST.
FORGET YOUR HOPES. THEY WERE WHAT BROUGHT YOU HERE.