To Russell Davies: a letter from Cardiff 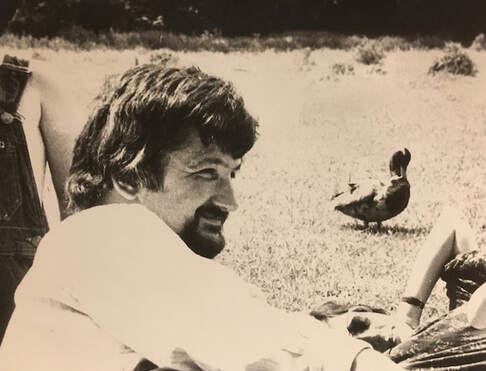 Dear Dai: I’m writing to you from location
For the new McKenzie film, in which I play
A role that would have filled me with elation
When I used to drink two-handed every day,
But as things are, it fills me with dismay –
With me no more than three weeks on the wagon
They’re handing me free Foster’s by the flagon.

I’m meant to be, you see, a drunken critic
Arrived in Europe form the Great South Land:
The least articulate, most paralytic
Plug-ugly in McKenzie’s merry band,
Escorting that chaste hero on a grand
Excursion through the more arcane and zanier
Interstices of deepest Transylvania.

Which place we double here, in Cardiff (Wales),
Whose Burges follies neatly fill the bill:
They’ve even got the right-sized drawbridge nails.
Cold Castle Coch, perched darkly on a hill,
And Cardiff Castle in the city, will,
When cut together, serve as a spectacular
Surround for a larf riot spoofing Dracula.

Oh Cardiff! Dai, your homeland’s sovereign seat,
This city of arcades and . . . more arcades,
I’ve hardly seen it yet. Is there a main street?
No time for galleries or bookshop raids:
When precious shooting-time at evening fades
We shuttle back in vans to our hotel
And thank God that at least the beds work well

For nothing else there operates at all.
You risk your reason when you take your key.
They never wake you if you leave a call,
Do when you don’t, refuse to give you tea
In bed unless asked not to – but get me.
I’m dining every evening in the presence
Of clown Dick Bentley, clever Donald Pleasence

And crazy Barry Humphries: no regrets.
On top of that, of course, I watch them work
Their wonders from sunrise until it sets -
A feast of practised talent which I lurk
In awe to ogle, feeling like a berk.
I think, my friend, our highest common factor
The certainty we share that I’m no actor.

Whereas, of course, you are – about the best
I met at Cambridge. Have you given up
That gift to spend more effort on the rest?
Your dispositions overflow the cup.
No matter. Early days. The night’s a pup.
Though there be times you’d like to see the back of
A few of all those trades you’re such a Jack of

It’s too soon to be certain what’s dispensable.
You’re bound to write more, draw more, play more jazz:
The man who brands your output reprehensible
You’ll know to be a monomorph like Bazz,
Whose one-track mind’s the only knack he has.
I fear our purist friends find nothing seedier
Than the way we spread ourselves around the Media,

But we both know you are, with all your bents,
As much compelled as I am with my few
To make from art and life some kind of sense
That leaves room for enjoying what we do.
Hermetic rhetoric aside, what’s new
In serving more than one urge to excel
Like Michelangelo or Keith Michell?Now I myse

lf, though full-time a pop lyricist,
Have found the odd stint as a strict-form poet
Has rendered me less trusting, more empiricist,
Concerning technique and the need to know it.
This stuff you must make work or else you blow it.
Sincere intent alone is not enough:
For though the tone is light, the rules are tough.

The obstacle, says Gianfranco Contini,
Is what brings creativity to birth.
(His mind unlocks a problem like Houdini.
The best-equipped philologist on Earth,
Contini, in my view – for what that’s worth –
Was sent by providence to heal the schism
That sunders scholarship from criticism.)

The obstacle for Dante, claims the Prof.,
Lay in the strictness of the terza rima.
The old New Style perforce was written off,
Or rather, written up: the lyric dreamer
Got sharper with his tongue, became a schemer
Co-opting dozens of vocabularies
Into a language that forever varies

Yet in its forward pressure never falters –
A rhythmic pulse that somehow stays the same
For all its concrete detail always alters.
A form he would, when young, have thought a game
Had now the status of a sacred flame,
A fertile self-renewing holy trinity
Designed to give his Comedy divinity.

It worked, too, as I’m sure you have detected
Now that you’re trained to read the Eyetie tongue.
At least I hope you have. If you’ve neglected
Your Dante when like mine your wife’s among
His foremost female fans, you should be hung,
Or hanged. At getting grammar through to students
Your Judy’s letter perfect, like my Prudence,

Who’s perfect in all ways . . . but I digress.
However true, it’s crass to call one’s spouse
A paragon of loving comeliness
Who yet rates alpha double plus for nous
While still remaining keen to clean the house.
A paradox worth pondering upon:
We each loathed Academe, yet wed a don.

I don’t know what my wife’s at, half the time:
Locked up with microfilms of some frail text
Once copied from a copy’s copy. I’m
Dead chuffed as well as miffed to be perplexed,
Contented neither of us has annexed
The other’s field. Though it’s conceited-sounding,
We Jameses think each other quite astounding.

I’d like to be back there at home right now,
Receiving from my helpmeet a fond look.
But here we Aussies are, rehearsing how
To quell with every cheap trick in the book
The Castle’s evil Oriental cook –
A role played by a lithe and slightly spooky
Karate-ka 5th Dan, Meijii Suzuki.

He is (ah, but you twigged!) a Japanese.
I’ve never seen a man more fit or fleeter.
That guy can pull your teeth out with his knees
And kick the whiskers off a passing cheetah.
To Bazza’s pals (me, Scrotum, Tazz and Skeeter)
Whom Meijii smites (the script says) hip and thigh,
He looks like at least seven samurai.

Perhaps propelled by an electric motor
His flying feet can draw blood like a knife.
His brain by Sony, body by Toyota,
This bloke’s the Yellow Peril to the life:
And yet, a man of peace. In place of strife
He puts a focused force of meditation
That transcendentalizes aggravation.

A day of learning not to get too near him
Can leave you breathless. Think I’ll hit the sack.
I’d like to tell the lad that, while I fear him,
I love the way he works; but there’s a lack
In our communication. Keeping track
Of when he plans to lash out without warning
Has knackered me for now. More in the morning.

Another day since I began composing
These verses in spare moments has now passed,
And here’s a whole free hour I can’t spend dozing:
A chance to see the gallery at last.
It’s early closing, though: so, breathing fast,
I sprint to the museum, pay 10p,
Race up the stairs, and Pow! Guess what I see:

Enough to make a man burst into tears.
Renoir’s ‘Parisian Girl’. A lilting dream
He painted, to the year, one hundred years
Ago. Deep storm-cloud blue and double cream,
Her clothes and skin are eddies in a stream
Of brush-strokes on a shawl of pastel silk,
A peacock-feather spectrum drowned in milk.

These rhapsodies in blue are his best things,
The style in which he really gets it on.
The jeu de Paume has one that fairly sings –
A portrait of his kids, including Jean,
The boy who, when Pierre-August was gone,
Became Renoir – whose pictures, as it proved,
Were just as human, just as great, and moved.

Even unto the second generation
Sheer genius descended, fully fashioned.
A transference that rates as a sensation:
That kind of baton-change is strictly rationed.
For which our gratitude should be impassioned –
If artistry, like money, ran in bloodlines
You very soon would find those bloodlines dud lines

Or dead lines. But we ought to leave to P. B.
Medawar the Nature-Nurture number:
I’m sure he’s in the right. I’d get the heebie-
Jeebies reading Eysenck, except slumber
Has always supervened. They’re loads of lumber,
Those figures meant to prove genetic strains
Determine your inheritance of brains.

For nobody escapes the play of chance.
The contract’s binding: you have got the part.
You have to mime and juggle, sing and dance,
And when you think you’ve got the role by heart
Some idiot rewrites it from the start.
Nor is there, when your scenes run into trouble,
A volunteer prepared to be your double.

Tomorrow we’re going to film the kung-fu brawl.
Its imminence has got me feeling cagey,
Not least because I’m due to take a fall.
I’m worried (a) my acting might look stagey,
And (b) I’ll have me head caved in by Meijii.
Cavorting with delight at making flicks
He’ll get his thrills, but I might get his kicks.

The fight-arranger is my chum Alf Joint,
The stuntman King (he did Where Eagles Dare,
The caper on the cable car). The point,
Says Alf, in flying safely through the air
Is landing with some energy to spare
So as to ease the shock of logs and boulders
By smart use of one’s padded arms and shoulders.

‘You’re falling about two foot six,’ they’ve said.
When put like that it doesn’t sound like much.
The catch, though, is I’m landing on my head.
My first film role will need the tumbler’s touch
Or else end on a stretcher or a crutch.
From Alf, who’s done an eighty-times-as-high dive,
I can’t expect much sympathy when I dive.

This could be the last stanza of my poem.
I’ll scrawl a coda if I come up smiling,
But now I have to get out there and show ‘em.
I find the idea nowhere near beguiling:
Suzuki’s leg looks like a concrete piling.
But Hell, let’s go. What’s coping with a killer
To someone who wrote monthly for Karl Miller?

Per ardua ad astra. I survived!
The scrap went perfectly. In Panavision
It should seem like the Day of Wrath’s arrived.
My nose and Meijii’s toe-faked their collision
And I, without a second’s indecision,
Collapsed. I toast (in Coke) success (comparative)
And him who wrote my role into the narrative,

Bruce Beresford. From birth, my oldest mate
Was destined to call ‘Action’, ‘Cut’ and ‘Print’
And ‘Stop’ and ‘What went wrong? You fainted late,’
‘You died too soon,’ ‘No good, I saw you squint,’
And (this to me) ‘You’re mugging. Make like Clint
Or Kirk or Burt. Don’t even bat an eyelid:
Then, when the kick comes, crumple the way I did.’

That we would see in letters five feet high
His name one day spread shining in the gloom
Preceded with the words ‘Directed by’ –
To doubt that prospect there was never room.
He had the screenplay ready in the womb.
He was (he’ll know I say it without unction)
By nature built for one creative function.

Alas, not true for us. We’re several sided;
I to a certain, you to a large, degree.
The age is vanished when we might have prided
Ourselves on that. Karl Marx said history
Will get a re-run, but as parody.
The Universal Man won’t be returning.
Too bad. But as I write, the castle’s burning:

Our week in Wales will finish with this shot.
The clapperboard has clapped its final clap.
Sighs. Tears. Farewells. You know the bit. The lot.
We’ll soon hear, barring unforeseen mishap,
The first assistant calling, ‘It’s a wrap.’
Of our last day, this is the day’s last light
When darkest daylight shades to lightest night –

The time the film crew calls the golden hour.
The castle quakes. The FX flames leap higher.
We rescue Edna Everage from the tower
And super the end titles on the fire.
The heavy croaks. Our triumph is entire.
It’s time to say, ‘Nuff said.’ You don’t mind, do you?
I’ll post this now, then try to beat it to you.
Copyright © 2019
​Built & managed  By Dawn Mancer