A Valediction for Philip Larkin 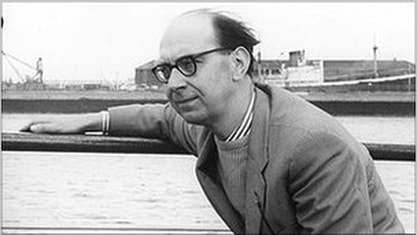 You never travelled much but now you have,
Into the land whose brochures you liked least:
That drear Bulgaria beyond the grave
Where wonders have definitively ceased –
Ranked as a dead loss even in the East.

Friends will remember until their turn comes
What they were doing when the news came through.
I landed in Nairobi with eardrums
Cracked by the flight from Kichwa Tembo. You
Had gone, I soon learned, on safari too.
​
Learned soon but too late, since no telephone
Yet rings in the wild country where we’d been.
No media penetration. On one’s own
One wakes up and unzips the morning scene
Outside one’s tent and always finds it green.

Green Hills of Africa, wrote Hemingway.
Omitting a preliminary ‘the’,
He made the phrase more difficult to say –
The hills, however, easier to see,
Their verdure specified initially.

Fifty years on, the place still packs a thrill.
Several reserves of greenery survive,
And now mankind may look but must not kill
Some animals might even stay alive,
Surrounded by attentive four-wheel-drive

Toyotas full of tourists who shoot rolls
Of colour film off in the cheetah’s face
While she sleeps in the grass or gravely strolls
With bloody cheeks back from the breathless chase,
Alone except for half the human race.

But we patrolled a less well-beaten trail.
Making a movie, we possessed the clout
To shove off up green hill and down green dale
And put our personal safety in some doubt
By opening the door and getting out.

Thus I descended on the day you died
And had myself filmed failing to get killed.
A large male lion left me petrified
But well alone and foolishly fulfilled,
Feeling weak-kneed but calling it strong-willed.

Silk brushed with honey in the hot noon light,
His inside leg was colonized by flies.
I made a mental note though wet with fright.
As his mouth might have done off me, my eyes
Tore pieces off him to metabolize.

In point of fact I swallowed Kenya whole,
A mill choked by a plenitude of grist.
Like anabolic steroids for the soul,
Every reagent was a catalyst –
So much to take in sent me round the twist.

I saw Kilimanjaro like the wall
Of Heaven going straight up for three miles.
The Mara river was a music hall
With tickled hippos rolling in the aisles.
I threw some fast food to the crocodiles.

I chased giraffes who floated out of reach
Like anglepoise lamps loose in zero g.
I chased a mdudu with a can of bleach
Around my tent until I couldn’t see.
Only a small rhinoceros chased me.

The spectral sun-bird drew the mountain near,
And if the rain-bird singing soon soon soon
Turned white clouds purple, still the air was clear –
The radiant behind of a baboon
Was not more opulent than the full moon.

So one more tourist should have been agog
At treasure picked up cheaply while away –
Ecstatic as some latter-day sea dog,
His trolley piled high like a wain of hay
With duty-free goods looted from Calais.

For had I not enlarged my visual scope,
Perhaps my whole imaginative range,
By seeing how that deadpan antelope,
The topi, stands on small hills looking strange
While waiting for the traffic lights to change?

And had I not observed the elephant
Deposit heaps of steaming excrement
While looking wiser than Immanuel Kant,
More stately than the present Duke of Kent?
You start to see why I was glad I went.

Such sights were trophies, ivory and horn
Destined for carving into objets d’art.
Ideas already jumping like popcorn,
I climbed down but had not gone very far
Between that old Dakota and the car

When what they told me stretched the uncrossed space
Into a universe. No tears were shed.
Forgive me, but I hardly felt a trace
Of grief. Just sudden fear your being dead
So soon had left us disinherited.

You were the one who gave us the green light
To get out there and seek experience,
Since who could equal you at sitting tight
Until the house around you grew immense?
Your bleak bifocal gaze was so intense,

Hull stood for England, England for the world –
The whole caboodle crammed into one room.
Above your desk all of creation swirled
For you to look through with increasing gloom,
Or so your poems led us to assume.

Yet even with your last great work ‘Aubade’
(To see death clearly, did you pull it close?)
The commentator must be on his guard
Lest he should overlook the virtuose
Technique which makes majestic the morose.

The truth is that you revelled in your craft.
Profound glee charged your sentences with wit.
You beat them into stanza form and laughed:
They didn’t sound like poetry one bit,
Except for being absolutely it.

Described in English written at its best
The worst of life remains a bitch to face
But is more shared, which leaves us less depressed –
Pleased the condition of the human race,
However desperate, is touched with grace.

The seeming paradox is a plain fact –
You brought us all together on your own.
Your saddest lyric is a social act.
A bedside manner in your graveyard tone
Suggests that at the last we weren’t alone.

You wouldn’t have agreed, of course. You said
Without equivocation that life ends
With him who lived it definitely dead
And buried, after which event he tends
To spend a good deal less time with his friends.

But you aren’t here to argue. Where you are
By now is anybody’s guess but yours.
I’m five miles over Crete in a Tristar
Surrounded by the orchestrated snores
Induced by some old film of Roger Moore’s.

Things will be tougher now you’ve proved your point,
By leaving early, that the man upstairs
Neither controls what happens in the joint
We call the world, not noticeably cares.
While being careful not to put on airs.

It is perhaps the right time to conede
That life is all downhill from here on in.
For doing justice to it, one will need,
If not in the strict sense a sense of sin,
More gravitas than fits into a grin.

But simply staying put makes no one you.
Those who can’t see the world in just one street
Must see the world. What else is there to do
Except face inescapable defeat
Flat out in a first-class reclining seat?

You heard the reaper in the Brynmor Jones
Library cough behind your swivel chair.
I had to hear those crocodiles crunch bones,
Like cars compressed for scrap, before the hair
Left on my head stood straight up in the air.

You saw it all in little. You dug deep.
A lesser man needs coarser stimuli,
Needs coruscating surfaces … needs sleep.
I’m very rarely conscious when I fly.
Not an event in life. To sleep. To die.

I wrote that much, then conked out over Rome,
Dreamed I’d been sat on by a buffalo,
Woke choking as we tilted down for home,
And now see, for once cloudless, the pale glow
Of evening on the England you loved so

And spoke for in a way she won’t forget.
The quiet voice whose resonance seemed vast
Even while you lived, and which has now been set
Free by the mouth that shaped it shutting fast,
Stays with us as you turn back to the past –