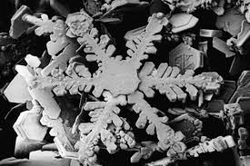 Changes in temperature entail turmoil.
Petits pois palpitate before they boil.
Ponds on the point of freezing look like oil.
As God knows what goes on below the soil.

God and the naturalists, who penetrate
With camera crews to depths as dark as fate
And shoot scenes hideous to contemplate
Where burrowing Attenboroughs fight and mate.

In outer space the endless turbulence
Seems too far gone to be at our expense.
One likes to think that if a bang’s immense
It didn’t happen in the present tense.

Still it’s unnerving when two galaxies –
One Catherine wheel and one like a Swiss cheese –
Get stuck in with sharp elbows and scraped knees,
Cancelling out their twin eternities.

As for inside the atom here at home,
It makes the cosmos look like jeu de paume
Played out around the Houston Astrodome.
We might as well be back in ancient Rome.

Random, unjust and violent universe!
We feel, and those less ignorant feel worse,
Knowing that what’s observed must soon disperse
And Phaethon’s car turn out to be a hearse.

Hence, or despite that, our concern with form,
Though even here outclassed by nature’s norm.
Snowflakes knock spots off Philibert de L’Orme
But something tells us that they are not warm.

Not that we are, compared with, say, the worms
Who live on lava, or are those the germs
That breed in butane and eat isotherms?
I’m not much good with scientific terms.

Even for Einstein it remained a dream
To unify the field, which makes it seem
Likely the rest of us won’t get a gleam
Of how, or if, the whole works fit a scheme.

One merely hopes that we have made a start.
Our apprehensions might not melt the heart
Or even be heartfelt for the most part,
But from that insufficiency comes art.

We gather ourselves up from the abyss
As lovers after a copulation kiss –
Lip-service which, while semaphoring bliss,
Puts in a claim that there was a point to this.

​Small wonder, therefore, that from time to time,
As dollar millionaires still nickel-and-dime,
The free-form poet knuckles down to rhyme –
Scared into neatness by the wild sublime.
Copyright © 2019
​Built & managed  By Dawn Mancer