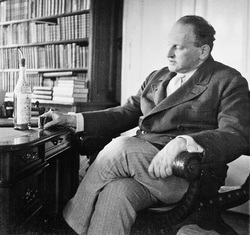 Egon Friedell committed suicide
By jumping from his window when he saw
Approaching Brownshirts eager to preside
At rites the recent Anschluss had made law.

Vienna’s coffee-house habitués
By that time were in Paris, Amsterdam,
London, New York. Friedell just couldn’t raise
The energy to take it on the lam.

Leaving aside the question of their looks,
The Jews the Nazis liked to see in Hell
Were good at writing and owned lots of books –
Which all spelled certain curtains for Friedell.

Friedell was cultivated in a way
That now in Europe we don’t often see.
For every volume he’d have to pay
In pain what those thugs thought the fitting fee.

Forestalling them was simply common sense,
An act only a Pharisee would blame,
Yet hard to do when fear is so intense.
Would you have had the nerve to do the same?

The normal move would be to just lie still
And tell yourself you somehow might survive,
But this great man of letters had the will
To meet his death while he was still alive.

So out into the air above the street
He sailed with all his learning left behind,
And by one further gesture turned defeat
Into a triumph for the human mind.

​The civilized are most so as they die.
He called a warning even as he fell
In case his body hit a passer-by
As innocent as was Egon Friedell.
Copyright © 2019
​Built & managed  By Dawn Mancer