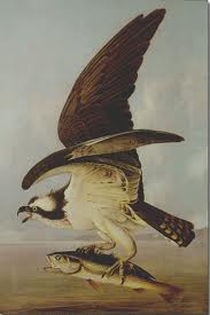 The ichthyologist Constantine Rafinesque-Schmaltz
(Who was pleased to be known as quite simply Rafinesque)
And John James Audubon the famous student of birds
(Whose folios are generally thought too gorgeous for words
Although when opened they envelop your entire desk)
Teamed up in America as if they were dancing a waltz.

It was neither fish nor fowl crabbed their double act.
The flap in their cabin was caused by a humble bat
Which Rafinesque with the nearest thing to hand attacked,
Thus pounding Audubon’s beloved violin out flat.

The revenge Audubon took was oblique but sure.
He returned from the Ohio River with drawings, life-size,
Of fish Rafinesque hadn’t seen hide nor hair of before,
But belief in Audubon’s pencil put scales in his eyes.

​He published a book which his enemies loves for its faults.
To pay with his fame for a fiddle was clearly grotesque.
With the object of leading his friend up a similar creek
He might justly have fashioned a phoenix claw or orc beak,
But he showed the forebearance implied by his name, Rafinesque.
Now Audubon’s plates are hoarded like gold in the vaults

And only the fish honour Constantine Rafinesque-Schmaltz.
Copyright © 2019
​Built & managed  By Dawn Mancer