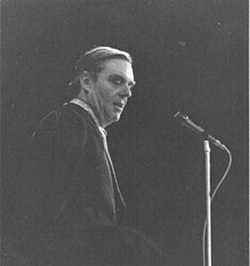 Now that I am Oxford Professor of Poetry, Django Reinhardt,
I salute your memory with more humility than ever.
You with crippled hands
Plucked everlasting beauty on that Dicky Wells
Paris Concert LP that I wore out.
You thought that different moons shone over France and England
But you played something superlative every time. No intellectual,
You were all artist. I wish, increasingly, that I were less
Intellectual. I would like to be a gipsy guitarist
With his fingers burned off playing with Dicky Wells,
Matching glittering silver guitar-runs to the black ripeness
Of his golden horn. I find, myself,
That to be prolific comes easily
But to be memorable takes effort. I wish
I could do what you did on La Mer. Wish also, Django, mon cher,
That I could be more humble.

Now that I am Oxford Professor of Poetry, Michelangelo Buonarotti,
I revere your achievement and feel increasingly less complacent.
The culture which gave rise to you had everything you needed
Except the Wolfenden Report. You could design buildings,
Write sonnets in Italian, and when you painted a ceiling
It stayed painted. But above all, you could sculpt.
Michelangelo, amico, you once said
That you chipped away the marble until you found the statue inside.
As a poet I have been using the same technique for years, and wish
That I could be even less complacent than I am now. Capito?

P.S. Could you use a few bags of marble chips? I’ve Got a garage full.

Now that I am Oxford Professor of Poetry, Wolfgang Amadeus Mozart,
The mere mention of your name brings me up short, wishing
That I had made better use of my time. At my age
You had been dead for years, yet look
At the stuff you turned out. Figaro. Don Giovanni. K488.
The Flute.
You never finished your Requiem, of course; and I try to take
Comfort from that. As a business brain, you were a non-starter
And freemasonry was a blind alley. You would never have made it
To the Oxford Chair of Poetry. But taken as a whole
Yours was a career that leaves a modern artist chastened.
My poem Wildtrack was influenced by the slow movement of your Fourth
Violin Concerto, although comparisons are odious. I bow.
Schlaf’wohl, Wolfgang – precursor of us all.

Now that I am Professor of Poetry, Rainer Maria Rilke,
I think of your prodigious gift and quell my surge of pride.
What was it, three-quarters of the Duinos and all the Sonnets
To Orpheus written in two weeks? Not even Wildtrack
Came as such a protean outpouring. And you had connections,
Bruder:
Contacts dwarfing anything of ours. Weekends
In a cloud-scraping Bavarian Schloss with aristocratic women!
Aus dem besitz der Grafin-Königen Marie von Thurn-und-Taxis Hohenlohe
You inscribed, while my lot dedicated stuff to Sadie Bloggs.
You make me feel small, Rainer, mein Freund, Dichter.
As do Wolfgang, Mike and Django.

​Now that I am Oxford Professor of Poetry, Stephen Spender,
I would just like to say Tough Luck, Baby,
But that’s the way the cookie crumbles. Someone has to lose,
So eat my dust.
The thirties haven’t got it in the nuts any more. My turn, padrone.
But stick around. We haven’t forgotten how you old guys
Opened up the rackets for the new ideas. Times have changed,
But we’ll find some action that fits your style. Can you drive?
Copyright © 2019
​Built & managed  By Dawn Mancer