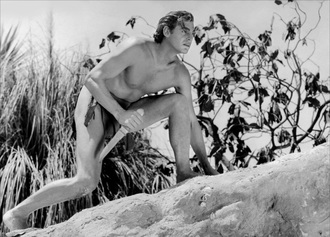 Apart possibly from waving hello to the cliff-divers
Would the real Tarzan have even touched Acapulco?
Not with a one-hundred foot vine.
Jungle Jim maybe, but the Ape Man never.
They played a tape at his funeral
In the Valley of Light cemetery of how he had sounded
Almost fifty years back giving the pristine ape-call,
Which could only remind all present that in decline
He would wander distractedly in the garden
With his hands to his mouth and the unforgettable cry
Coming out like a croak –
This when he wasn’t sitting in his swim-trunks
Beside the pool he couldn’t enter without nurses.

Things had not been so bad before Mexico
But they were not great.
He was a greeter in Caeser’s Palace like Joe Louis.
Sal, I want you should meet Johnny Weissmuller.
Johnny, Mr Sal Volatile is a friend of ours from Chicago.
With eighteen Tarzan movies behind him
Along with five Olympic gold medals,
He had nothing in front except that irrepressible paunch
Which brought him down out of the tree house
To earth as Jungle Jim
So a safari suit could cover it up.
As Jungle Jim he wasn’t just on salary,
He had a piece of the action,
But coming so late in the day it was not enough
And in Vegas only the smile was still intact.

As once it had all been intact, the Greek classic body
Unleashing the new-style front-up crawl like a baby
Lifting itself for the first time,
Going over the water almost as much as through it,
Curing itself of childhood polio
By making an aquaplane of its deep chest,
Each arm relaxing out of the water and stiffening into it,
The long legs kicking a trench that did not fill up
Until he came back on the next lap,
Invincible, easily breathing
The air in the spit-smooth, headlong, creek-around-a-rock trough
Carved by his features.

He had six wives like Henry VIII but don’t laugh,
Because Henry VIII couldn’t swim a stroke
And if you ever want to see a true king you should watch Weissmuller
In Tarzan Escapes cavorting underwater with Boy
In the clear river with networks of light on the shelving sand
Over which they fly weightless to hide from each other behind the log
While Jane wonders where they are.
You will wonder where you are too and be shy of the answer
Because it is Paradise.

When the crocodile made its inevitable entry into the clear river
Tarzan could always settle its hash with his bare hands
Or a knife at most,
But Jungle Jim usually had to shoot it
And later on he just never got to meet it face to face –
It was working for the Internal Revenue Service.

​There was a chimpanzee at his funeral,
Which must have been someone’s idea of a smart promotion,
And you might say dignity had fled,
But when Tarzan dropped from the tall tree and swam out of the splash
Like an otter with an outboard to save Boy from the waterfall
It looked like poetry to me,
And at home in the bath I would surface giving the ape-call.
Copyright © 2019
​Built & managed  By Dawn Mancer