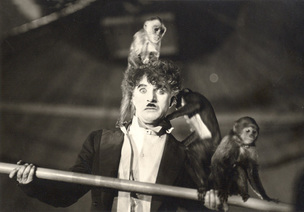 In ‘The Phantom of the Clouds’ Apollinaire
Pretended to have gone downstairs to see
The acrobats, and found that when he tried
To drink in what he saw them do, it all
Turned bitter on the tongue. Pink pantaloons
Looked like decaying lungs. The fun was spoiled,
The family act more destitute than when
Picasso painted it. The War was on.
Apollinaire was in it, hence the dudgeon.

Without belittling him, you still might say
He needed horror to dilute delight,
Since childish joy to grown men feels like loss,
If only of childhood. There was a time,
Quite early in Le Cirque imaginaire,
When Vicky Chaplin walked on the tight wire
Inverted underneath it, that I thought
I’d just turned five. Her father in his film
The Circus did a stunt like that, but had
To fake it, though with good results. He died
The death in later life, became a bore
About his immortality, which was
No longer under his control. It lives again
When his thin daughter, blessed with Oona’s looks,
Draped in sheet silver enters on all fours
High up on four tall stilts that look like six,
A basketballing insect from the depths
Of a benign nightmare.

Her husband makes
Surprises happen, just as, long ago,
With something of the same humility,
Her father could. A suitcase full of tricks
Yields up its secrets. Wherein lies the joke:
I mean the joke is that you see the way
It works. Except when the huge rabbit,
Which really couldn’t be in that red box,
Emerges to remind you that this coy
Parade of diffidence is based on full
Mastery of white magic.

Now the stage
Is full of birds and bouncing animals,
Of which only a few do not excrete.
Silk-slippered on the bare boards pipped with mire,
The happy couple take their curtain calls
And we go back into the world, which has,
No doubt, produced while we’ve been gone,
Plenty of stuff to cut this down to size –
Car bombs in day-care centres, coups d’état
In countries whose cash crop earns in a year
Less than Evita in a so-so week,
A torture farm in California
That takes all major credit cards.

​Back in
Reality it needs Apollinaire
(Who went on being right about a war
That cost him half his head) to help retrieve
My reason from the most misleading evening
We spent at the imaginary circus –
Which children shouldn’t see without a warning
Things might start looking different in the morning.

More Poems from Sentenced to Life