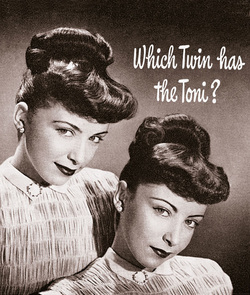 Advertisements asked "Which twin has the Toni?"
Our mothers were supposed to be non-plussed.
Dense paragraphs of technical baloney
Explained the close resemblance of the phoney
To the Expensive Perm. It worked on trust.

The barber tried to tell me the same sheila
With the same Expensive Perm was pictured twice.
He said the Toni treatment was paint-sealer
Re-bottled by a second-hand car dealer
And did to hair what strychnine did to mice.

Our mothers all survived, but not the perms.
Two hours at most the Toni bobbed and dazzled
Before the waves were back on level terms,
Limp as the spear-points of the household germs
An avalanche of Vim left looking frazzled.

Another false economy, home brew
Seethed after nightfall in the laundry copper.
Bought on the sly, the hops were left to stew
Into a mulch that grunted as it grew.
You had to sample it with an eye-dropper,

Not stir it with a stick as one mum did.
She piled housebricks on top, thinking the gas
Would have nowhere to go. Lucky she hid
Inside the house. The copper blew its lid
Like Krakatoa to emit a mass

Of foam. The laundry window bulged and broke.
The prodigy invaded the back yard.
Spreading across the lawn like evil smoke
It murdered her hydrangeas at a stroke
And long before the dawn it had set hard.

On a world scale, one hardly needs to note,
Those Aussie battlers barely had a taste
Of deprivation. Reeling from the boat
Came reffo women who had eaten goat
Only on feast days. Still, it is the waste

I think of, the long years without our men,
And only the Yanks to offer luxuries
At a price no decent woman thought of then
As one she could afford, waiting for when
The Man Himself came back from Overseas.

And then I think of those whose men did not:
My mother one of them. She who had kept
Herself for him for so long, and for what?
To creep, when I had splinters, to my cot
With tweezers and a needle while I slept?

Now comes the time I fly to sit with her
Where she lies waiting, to what end we know.
We trade our stories of the way things were,
The home brew and the perm like rabbit fur.
How sad, she says, the heart is last to go.

The heart, the heart. I still can hear it break.
She asked for nothing except his return.
To pay so great a debt, what does it take?
My books, degrees, the money that I make?
Proud of a son who never seems to learn,

​She can't forget I lost my good pen-knife.
Those memories of waste do not grow dim
When you, for Occupation, write: Housewife.
Out of this world, God grant them both the life
She gave me and I had instead of him.
Copyright © 2019
​Built & managed  By Dawn Mancer