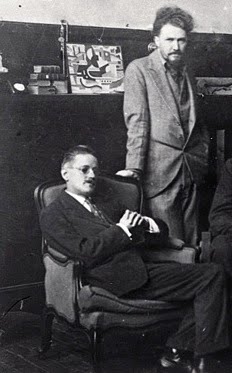 If T.S. Eliot and Ezra Pound
Came back to life, again it would be found
One had the gab, the other had the gift
And each looked to the other for a lift.

The Waste Land, had not Pound applied his blue
Pencil, might well have seemed less spanking new.
Pound was a crackpot but that made his critical
Prowess particularly analytical.

Embarrassing, however, there's no doubt:
Increasingly too crass to have about.
While Eliot held discreetly right-wing views
Pound yelled obscenities about the Jews.

For Eliot, the time to cause a stir
Was past, and dignity was de rigueur,
But Pound preferred to hang out with the boys
In boots and black shirts who made lots of noise.

For Eliot the war brought veneration:
He seemed to speak for his adopted nation.
When Pound spoke it reminded Mussolini
What it had cost them to lose Toscanini.

Pound wound up in a cage and might have swung
Or died strapped down if he had not been sprung.
A big prize for the Cantos saved his neck
Though even he half-guessed they were a wreck.

The rackety campaign in Pound's support
Worked only because Eliot took thought
On how il miglior fabbro might best be
Saved for a dignified senility.

His tactic was to let it be inferred
That though he nowadays thought Pound absurd,
The established master and his erstwhile mentor
Were still somehow one creature, like a centaur.

One was the head, the other the hindquarters
(A point made by the more astute reporters)
But few dared to protest at a free pass
For such a well-connected horse's arse.

Pound in his dotage made no spark of sense
But Eliot, still staunch in his defence,
Remembered how it took a cocksure friend
To help unscramble radium from pitchblende.

​Pound falling silent, Eliot sat in state.
Though some said what he did was etiolate,
Most regally he'd kept the palace rule --
Never lose sight of what you owe your fool.
​
(August 2000)
Copyright © 2019
​Built & managed  By Dawn Mancer