The Anchor of the Sirius 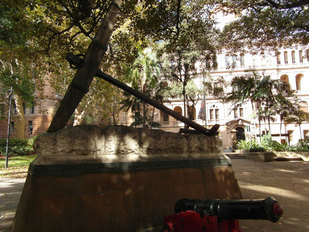 Triangular Macquarie Place, up from the Quay,
Is half rainforest, half a sculpture park
Where can be found – hemmed in by palms and ferns,
Trees touching overhead – the Obelisk
From which, one learns, All Public Roads are Measured
Leading to the Interior of the Colony.
Skyscraper cliffs keep this green garden dark.
​
The Obelisk is sandstone. Thomas Mort
Is also present, bronze on a tall plinth –
His plain Victorian three-piece suit bulks large,
Befitting Syney’s first successful exporter
Of refrigerated foods – while, lower down
This plush declivity, one finds a bubbler
Superfluously shaded by a small
But intricate gun-metal baldacchino,
Sure-footed as a Donatello font.

Thus in a sculpture court less up to date
Yet cooler than MOMA’s, leafier than the Frick,
One strolls encountering pieces carried out
In traditional materials and is lulled –
Till this free-standing object looms and startles
Like a Calder by Duchamp. It stops you cold,
The anchor of the Sirius. It hooks you
More firmly than the fluke which can’t be seen
(Because, presumably, buried in the earth)
Could ever have snared the bottom of Sydney Cove.

One is amazed by how it is not old –
Which means the Colony’s protracted birth
(The women were outscreamed by the flayed men)
Falls so far short of being long ago
It’s hard to grasp. The anchor was brought back
From where the ship ended its history –
I think it tried to sail through Norfolk Island –
To where it began ours. Yes, the First Fleet
Dropped its first anchor just one hundred yards
(Or metres, as they say now) down the street –
And this is it, not much more touched by time
Than now by me, a yokel in the museum.

The crops failed. Philip was no dynamo,
But Macquarie was, and men like Mort could double
The town’s wealth in ten years. The scrub grew long
And lush like Joan Sutherland’s throat. Success
Went overseas, took umpteen curtain calls,
Was toasted and had toast named after it,
And now the audience is here. Out on the harbour
Captain Cook II jam-packed with Japanese,
Their Nikons crackling like automatic flak,
Goes swanning past the well-remembered line
Where the submarine nets were when I was young,
Forty years ago – i.e. a full
Fifth of the time Port Jackson’s had that name.

And after I’d grown up and gone away
Like the wool-clip to the other end of the world
(Where the wool was turned to suit-cloth and sent back
So Thomas Mort, full of ideas as Dickens,
Might look the part of the philanthropist)
The anchor of the Spirius had me pinned -
Spiked, rooted to the spot under these trees
Which filter what light’s left by the glass towers
They put up yesterday so that the banks –
Algemene Bank Nederland NV,
Dresdner Bank AG, Banco Nazionale del Lavoro,
Sumitomo International Finance Australia –
Might catch through tinted windows like hot news
Digits conveying all they need to know,
Drawn down form space by ranks of VDUs
And here made manifest as a green glow –
New York and London, Hong Kong, Tokyo,
Sucked in at once to this same lightning rod –
Completing their great journey from afar
As a tired sinner comes at last to God,
As a ship comes in and drops anchor.
Copyright © 2019
​Built & managed  By Dawn Mancer