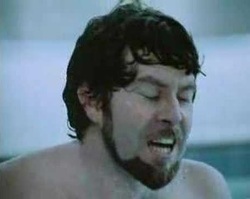 The Backstroke Swimmer Rolf Harris: to mark his seventieth birthday
​
When young he was a backstroke champion,
Even to fans a fact not widely known.
Backstrokers lie down, look up at the sun
And must get used to being on their own.
Backstrokers squint to ward off the bright sky
And at the most they see where they have been.
His future lay behind him, how he’d fly
One day to great fame on a little screen.
The beard, the felt-tips and the wobble-board,
The task of tying down a kangaroo –
These things the children of the world adored.
Small injured animals admire him too.
Kittens up trees, dogs trapped in microwaves
Are grateful for his friendly, nasal drawl:
Tots lower hamsters into tiny graves
Sure that his tender heart sustains them all.
He was, is still, the incarnation of
The Australian spirit, spry yet down to earth:
Raw energy that taught itself to love
The strange life in the vast land of its birth.
The world has learned from him and I likewise.
For me, however, what he has to teach
Starts where the spine-basher screwed up his eyes:
The loose, long-footed kick, the easy reach –
Signs of true power, which lies in the power to spare.
The strength behind all useful gentleness
Is gained by seeing that the past is there
And what comes next a man can only guess.
He stretched, he yawned, and woke up to world fame.
He grinned, and children by the million grew
To adulthood still smiling at his name,
His laugh lines hard-earned from the harsh but true
Sting of chlorine, the flame that bleached the blue.