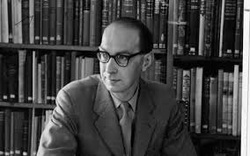 Reverence, and calls nightly like bad dreams
To make sure that that happens. Here he keeps
Elected frith, his thanedom undespited,
Ensconced against the mating-mandrill screams
Of this week’s Stundents’ Union Gang-Bang Sit-in,
As wet winds scour the Wolds. The moon-cold deeps
Are cod-thronged for the trawlers now benighted,
North. The inland cousin to the sail-maker
Can still bestride the boundaries of the way-acre,

The barley-ground and furzle-field unwritten
Fee simple failed to guard from Marks & Spencer’s
Stock depot some time back. (Ten years, was it?)
Gull, lapwing, redshank, oyster-catcher, bittern
(Yet further out: sheerwater, fulmar, gannet)
Police his mud-and-cloud-ashlared defences.
Intangible revetments! On deposit,
Chalk thick below prevents the Humber seeping
Upward to where he could be sitting sleeping,

So motionless he lowers. Screwed, the planet
Swerves towards its distant, death-dark pocket.
He opens out his notebook at a would-be
Poem, ashamed by now that he began it.
Grave-skinned with grief, such Hardy-hyphened diction,
Tight-crammed as pack ice, grates. What keys unlock it?
It’s all gone wrong. Fame isn’t as it should be –
No, nothing like. ‘The town’s not been the same’,
He’s heard slags whine, ‘since Mr Larkin came’.

Sir John arriving with those science-fiction
Broadcasting pricks and bitches didn’t help.
And those Jap PhDs, their questionnaires!
(Replying ‘Sod off, Slant-Eyes’ led to friction.)
He conjures envied livings less like dying:
Sharp cat-house stomp and tart-toned, gate-mouthed yelp
Of Satchmo surge undulled, dispersing cares
Thought reconvenes. In that way She would kiss,
The Wanted One. But other lives than this - .

Fantastic. Pages spread their blankness. Sighing,
He knuckles down to force-feed epithets.
Would Love have eased the joints of his iambs?
He can’t guess, and by now it’s no use trying.
A sweet ache spreads from cramp-gripped pen to limb:
The stanza next to last coheres and sets.
As rhyme and rhythm, tame tonight like lambs,
Entice him to the standard whirlwind finish,
The only cry no distances diminish

​Comes hurtling soundless from Creation’s rim
Earthward – the harsh recitativo secco
Of spaces between stars. He hears it sing,
That voice of utmost emptiness. To him.
Declaring he has always moved too late,
And hinting, its each long-lost blaze’s echo
Lack-lustre as a Hell-bent angel’s wing,
That what – as if he needed telling twice –
Comes next makes this lot look like Paradise.
Copyright © 2019
​Built & managed  By Dawn Mancer