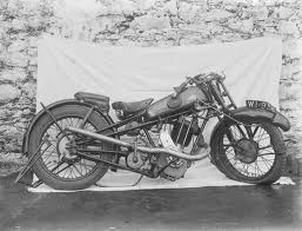 Philip Burman bought an old five hundred
Side-valve BSA for twenty quid.
Unlicensed as they were, both it and him,
He poker-faced ecstatically rode home
In second gear, one of the two that worked,
And everything that subsequently could be done
To make ‘her’ powerful and bright, he did:
Inside a year she fled beneath the sun
Symphonically enamelled black and plated chrome.

At eighteen years of age he gave up food,
Beer and all but the casual cigarette
To lay his slim apprentice money out
On extra bits like a special needle jet
For a carb the makers never knew about.
Gradually the exhaust note waxed more lewd,
Compression soared, he fitted stiffer springs
To keep the valves from lagging at their duties.
The decibels edges up, the neighbours nearly sued,
Hand over fist that breathed-on bike grew wings
Until her peak lay in the naughty nineties.

Evenings after school I’d bolt my meal
And dive around to his place. In the back
Veranda where he slept and dressed he’d have
Her roaring with her back wheel off the floor
Apocalyptically – the noise killed flies –
Her uncased primary chain a singing blur.
His pet Alsatian hid behind a stack
Of extra wheels, and on the mantelpiece
A balsa Heinkel jiggled through imagined skies.

There was a weekend that we took her out
To Sutherland to sprint the flying mile
Against a mob of Tiger Hundreds. I
Sat wild-eyed and saw his style tell,
Streaming the corners like remembered trails.
They topped him, nearly all of them, but still
They stood around and got the story. ‘What
It cost? No bull?’ And when we thundered home
I sat the pillion, following his line
Through corners with the drag behind my back
Plucking and fluttering my short like sails,
Dreaming his dreams for him of Avus Track,
Of Spa, the Ring, the Isle of Man TT,
The Monza Autodromo and the magic words, Grand Prix.

Two years later, on my spine at Ingleburn
Just after I came back from leave, I thought
Out piece by piece what must have happened.
He was older, and the bike was new: I’d seen
It briefly the year before and heard the things
He planned to do to it. Another BSA,
Still a push-rod job but OHV at least;
One-lung three-fifty. Home-made swinging arm
Both front and rear, a red-hot shaven head,
Light piston, special rings – the heavy stuff.
We lost contact. I kept hearing off and on
How broke he was from racing and improving her.

One Saturday while I practiced the Present
With Bayonet Fixed, a thousand entities
In bullring splendour of precision blaze
To gladden hearts of all who’d guard our shores,
He banked through Dunlop Corner at Mount Druitt
Leading a pack of AJ7Rs –
All camshaft jobs, but not a patch on him.
A fork collapsed. The bike kicked up and paused,
Her throttle stuck wide open, as he sprawled
With helpless hours to watch her pitch and toss
Like some slow-motion diver on a screen
Before the chain came down across his throat.

I had leave the evening after. Halfway down
The street a neighbour told me at her gate,
And then another neighbour – they were all
Ready and willing, full of homilies
And clucking hindsight. And, I’ll give them this,
Of grief too. He was noisy, but they’d liked him –
‘Phil killed himself at Druitt yesterday.’

It’s not that I felt nothing. I felt nothingness
Pluck at the armpits of my loose KDs
And balsa models jiggled on their shelves
While soaring roadways hurtled, shoulder high.
I had one thought before I turned away:

​The trouble is, with us, we overreach ourselves.
Copyright © 2019
​Built & managed  By Dawn Mancer