To Craig Raine: a letter from Biarritz 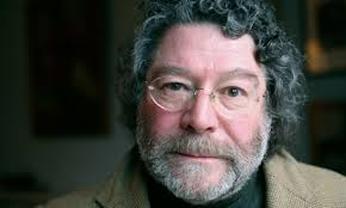 Dear Craig, I’ve brought your books down to the sea
In order to catch up with what you’ve done
Since first I gasped at your facility
For writing Martian postcards home. The sun
Illuminates The Onion, Memory
Two pages at a time. The beach girls run
With naked bosoms on my low horizon
And yet yours are the lines I’ve got my eyes on.

Not all the time perhaps, but none the less
It’s fair to say I’m utterly drawn in.
When praising your alchemical prowess
One hardly knows the best place to begin.
Your similes are struck with such success
At least one bard has called your gift a sin.
You spot resemblances with a precision
Not normally conferred by human vision.

What I admire and envy most, however,
Is your unflinching hunger for the real.
Proportionate you are but pallid never.
With strength of knee unknown to the genteel
You push on with your passionate endeavour
To sweep aside the veil of the ideal
And view the actual world on a straight footing
In every aspect, even the off-putting.

‘Your stomach’s got no eyes,’ a man once said
Who’d guessed I didn’t like how oysters look.
For you I’d stand that saying on its head:
Your eyes have got no stomach. The can brook,
Nay revel in, sights that would strike me dead
And make me queasy even in a book.
I’d like to call it sorcery or knavery
But all too clearly it’s a kind of bravery.

You’d need it, too, if you were here today,
I think I might just mention at this point.
For every sweet young curved hip on display
There squeaks a fearsomely arthritic joint.
Those oiled old hands will never smooth away
The cellulite and wrinkles they anoint,
And many of the bare breasts on parade
Sensationally fail to make the grade.

Squeezed flat and creased like empty toothpaste tubes
Or else inflated to degrees grotesque –
To sum up this array of has-been boobs
The only adjective is Düreresque.
That woman sports a pair of Rubik’s cubes.
That woman there could use hers as a desk.
At these exhausted sources of lactation
Words can’t convey my lack of fascination.

But back again to literary matters.
One or two critics, I have lately noted,
Are showing signs of going mad as hatters
At hearing you so often praised and quoted.
The strictest of them taciturnly natters
Of how you could well find yourself demoted:
You are too popular and should tread warily.
Also, he says, your lines end arbitrarily.

I always thought his ended when the bell
Rang on his Olivetti. Never mind.
Your stanza forms still check out pretty well,
Even if arbitrarily inclined.
They break no rules as far as I can tell.
There are no wasted words that I can find.
In later works your rhythm grows less striking
But that might mean strong rhythm’s to my liking.

Speaking of form and rhythm, incidentally,
Two water nymphs so beautiful I bet
The sight of them would paralyse you mentally
Are playing tennis. It seems I’m the net.
They must be highly privileged parentally:
Such clear skins and fine bones you only get
When there’s a solid family tradition
Of no-expense-spared, well thought-out nutrition.

Needless to say that with these two the breasts
From every viewpoint seen in A1 shape,
Though no doubt if it came to tactile tests
There’d be a yielding, as with a ripe grape.
Praise God that they’ve got those where we’ve got chests
I muse, while being careful not to gape –
A bald and overweight old coot form Sydney
Who cops a Frog tart’s let ball in the kidney.

Now they’ve pranced off and plunged into a wave
Which warmly fondles them as who would not.
Their gaiety of mood has left mine grave,
Preoccupied with man and his brief lot.
I think of time’s hourglass and bladed stave,
Of how we waste the few days that we’ve got,
Of how my youth is gone and shan’t return.
I must turn over or my back will burn.

I’m writing now in the supine position,
A posture more conducive to high thoughts
Of Culture and the means of its transmission.
From here on in I think you’ll find all sorts
Of pundits prophesying the perdition
Awaiting you, complete with boils and warts,
If you should go on proving so appealing
To the unclean, unthinking and unfeeling.

I don’t imply, I hasten to assure you,
Your fate’s to be a pop star like Kate Bush.
Though seas of spellbound faces stretch before you
The bodies underneath won’t pee or push.
I know the more you’re buttered up the more you
Will stay as untouched as the Hindu Kush.
Endowed with inspiration of such purity
You’d gladly follow it back to obscurity.

It’s obvious that you’re a heavyweight:
Your harshest critics can’t say otherwise.
Your status would remain inviolate
Though Jeff Nuttall should praise you to the skies.
In that regard you’ve got it on a plate,
Whence comes the shamrock tinge of certain eyes.
While hitting the jackpot in all essentials
You’ve managed to hand on to your credentials.

You write intensely and you’re entertaining.
For those of us less apt to do the first,
Apart from silence there’s one course remaining –
Which is to do the second. At the worst
(And when this happens it’s no use complaining)
The public clamours to be reimbursed,
But on the whole there’s some cause to be proud
If what one writes makes people laugh aloud.

Or so I think when critics in terms drastic
Inform the world my feet are half trochaic.
It seems my scansion’s absolutely spastic.
Even my best iambics are spondaic.
The poor fool’s sense of rhythm is elastic!
His diction is archaic Aramaic!
As for his rhymes, let’s send him back to Kogarah! Hell,
The stuff he drivels isn’t even dogarahhell!

It’s useless to invoke the semi-vowel
And point out ‘bevel’ is a rhyme for ‘Devil’.
The cloth-eared scribes who write prose with a trowel
Will smugly wonder if I’m on the level.
One really might as well throw in the towel.
Fulke Greville’s brother was called Neville Greville . . .
No, let the critics stew in their pale juice:
A joke’s a joke and it needs no excuse.

Far out on their twin-fin potato chips
The young star surfers sprint to climb astride
A wave as smooth as spit feels on your lips
And when it breaks you see them there inside –
Born acrobats trained to their fingertips.
Meanwhile here at the thin edge of the tide
A man pretending he’s a submarine
To please his children’s also in the scene.

A Boudin painted by Tiepolo,
A beige and azure fresco two miles long;
The sky brushed pink, the sable d’or aglow,
The plump swell dimpled like a silver gong;
The beach lit by le ciel, laved by les flots,
An airy glittering shantung sarong,
Unfolds into the south where with a stain
Of Monet nenuphars France turns to Spain.

And though down there the Basques will bomb your car,
Up here they are a people touched with grace.
They know the sweet years only go so far
And life is more than just a pretty face.
However poor and sick and old they are
The sun shines for them, too. They have a place.
A fact which would provoke me to deep thinking
Were not the sun now on the point of sinking.

Clear plum juice simmers in the solar disc.
The soft light off the pale blue water stipples
With gold the green cliff-clothing tamarisk.
The breathing sea sends in its silken ripples.
High on the sea wall the last odalisque
Looks down with mute approval at her nipples.
La mer, la mer, toujours recommencée.
But that’s enough of versing for one day.

​I’ll get up now and put on thongs and hat.
I’ll gather up your books and these few pages.
I’ll shake and roll my tatty rattan mat
And up the cliff trottoir by easy stages
I’ll dawdle with a feeling of that’s that –
Great talents may write poems for the ages,
But poetasters with their tongues in fetters
When all else fails at least can still write letters.