To Gore Vidal at Fifty 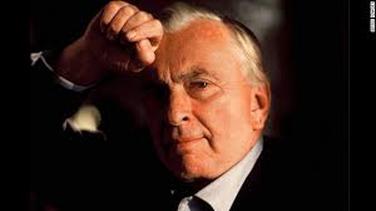 To Gore Vidal at – how should I commence?
The trick is to strike sparks and still make sense.
To Gore Vidal at fifty – sounds a lot.
Should I be flippant about that, or not?
To Gore Vidal at fifty years of age –
That slights the sprite, though it salutes the sage.
To Gore Vidal at fifty years of youth –
A trifle twee, but closer to the truth,
Since you (I speak in awe, not animosity)
Remain the incarnation of precocity,
A marvellous boy whose man-sized aureola
Still scintillates like fresh-poured Pepsi-Cola
(If I can mention safe from repercussions
The formula that Nixon sold the Russians),
Whose promise is renewed in the fulfilling,
A teenage thrill that goes on being thrilling,
A pledge kept firm with no recourse to perjury
Save incidental, mainly dental, surgery.
And yet you will admit you are no chicken.
Admit? Insist. The Peter Panic-stricken
Might cling to childhood out of self-delusion,
But that or any similar confusion
You’ve always held in absolute contempt –
The only absolute that you exempt
From your unwearyingly edifying
Assault on mankind’s thirst to be undying:
A hope you’ve never ceased to make a mock of
Or boldly nominate what it’s a crock of.
Small wonder you admire that far-off era
The clear lens of your style brings that much nearer,
In which, as Flaubert wrote (and here I quote,
Or, rather, quote what you said Flaubert wrote)
The gods were dead and Christ was not yet born,
A quick, cold night dividing dusk from dawn,
When man was quite alone, with nothing holier
To call his own than clear-eyed melancholia –
That penetrating gaze into infinity
Revealing it devoid of all divinity
And transcendental only in its endless
Detachment from our dread of feeling friendless –
A universe which neither plans our grief
Nor pampers us in payment for belief,
But rings its changes utterly unheeding
Though sadist die in bed or saint lie bleeding.
Committed in its course beyond retrieval,
Indifferent to all talk of good and evil,
Unreachable by prayer, untouched by curses,
It tirelessly assembles and disperses,
Created and destroyed and recreated –
Reduced, reprocessed and repristinated;
Its victories defeats, retreats advances,
Its triumphs tragedies, disasters dances,
Its involuted curves of time and distance
All adding up to one fierce, flat insistence –
That its immensities will still be there
When we are not. It simply doesn’t care.
This is the void that you with the cool grace
Of your prose style help teach us how to face.
This is the pit from which none can escape
Your wit lights up that we might see its shape.
But to convince the world the soul of Marcus
Aurelius must perish with his carcass
Was hard even for him. Most men prefer
To hide their heads in warm sand and not stir.
That public probity, not sexuality,
Is really the foundation of morality –
That justice plays no active part in fate,
Not even when fate leads to Watergate –
That all the prayers and powers of the Kennedys
Buy not one moment’s rest from the Eumenides –
That Caesar is not God, not the good Lord
Someone who walks and talks like Gerald Ford –
With facts like these we find it hard to grapple,
And much prefer to think Eve plucked the apple
Specifically so that redemptive love,
Beamed down on her descendants from above,
Could ease the pangs of her initial blunder
And make us grateful as we knuckle under.
My own view is that mankind would be worse
Than ever should that cloud of dreams disperse,
But your view is the one we’re here to praise
For how it penetrates the wishful haze
Which forms when all-too-human self-delusion
Allied with solipsism breeds confusion –
A mist that men call vision as they grope
And choking on it give the name of hope.
So dense a fog will be a long time thinning
So let’s call your work thus far a beginning,
And for our own sake wish your life that too –
And, friends before, years more be friends to you.