To Michael Frayn: a letter from Leningrad 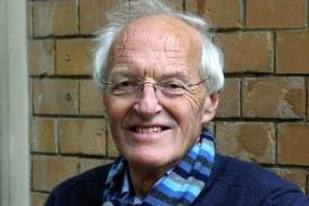 I
Dear Michael, here in Leningrad
The wind unseasonably chill
For April ought to make me sad,
And yet I feel a heady thrill
To see the white rice in the air
Blown every which way round the square
Before the Winter Palace. Cold
Grey sky sets off the flourished gold
And whipped-cream plaster rococo
Embellishments that help to make
The place look such a birthday cake –
I only wish there were more snow.
Despite the risk of frozen feet
I’d like to see the dream complete.

II
Speaking of feet: they’re killing me.
I’ve walked around the city now
For ages, there’s so much to see.
Already I can well see how
Poets, composers, every kind
Of artist thought this town designed
Exclusively so that they might
Be stimulated day and night
To works of genius. I shan’t
Pretend to be quite in their league.
Indeed I’d rather plead fatigue
And shirk the challenge, but I can’t:
The ghosts of all those gifted men
Are sneering as I suck my pen.

III
The greatest of them all, of course,
Was Pushkin. I’m just halfway through
His masterpiece, but the full force
Of inspiration’s only too
Apparent. In all literature
There’s no fecundity so pure
As his. Through him the gods gave tongue
And made damned certain he died young.
So multifarious a voice,
So disciplined a formal sense –
His talent was just too immense.
He had to go. There was no choice.
Like Mozart he was Heaven-sent
And back to Heaven he soon went.

IV
Eugene Onegin! In an hour
I read one stanza. Such compression
Demands all one’s attentive power.
Besides, I must make a confession:
My Russian, after months of sweat,
Is really not so hot as yet.
In fact it’s pretty poor. As well
As being envious as Hell
Of all your other attributes,
I wish my army hitch had taught
Me tricks of a more taxing sort.
I studied how to polish boots
With spit and spoon. You got to know
The lingo of the dreaded foe.

V
We neither of us won the war.
I’m told it sort of went away
When both sides settled for a draw.
Lord Chalfont still has lots to say
About the imminent Red Threat,
But nothing much has happened yet
In global terms. The Warsaw Pact
Intractably remains a fact.
It’s hard to see how they could lose,
Our experts warn, should they advance.
Poor NATO wouldn’t stand a chance.
They’ve got more tanks than they can use.
By midday on D-Day Plus One
They’d be in Budleigh Salterton.

VI
But will they risk annihilation?
I don’t think anybody knows.
The thought of total devastation
If ever harsh words come to blows
Still keeps the Super Powers in check.
Better to writing each other’s neck
At second hand, on battlegrounds
Where losses can be kept in bounds.
When ideologies collide
They tend to choose exotic places
Where folk with ethnic-looking faces
Don’t mind committing suicide,
Or anyway don’t seem to. Thus
It’s all thrashed out without much fuss.

VII
Meanwhile the vast USSR
Grows ever stronger and more bored.
The ceaseless struggle rages far
Away, in little lands abroad.
The Marxist-Leninist ideal
At home long since became as real
As it could ever be. The State
Takes charge of everybody’s fate
From womb to tomb. Complete control
Is exercised on all resources.
The harnessing of natural forces
By now includes the human soul.
What you may do or even dream
Is all laid down by the regime,

VIII
Which should have no more use for terror.
The People now are too well drilled
To contemplate embracing error.
Assent’s so thoroughly instilled
That new directives are obeyed
Before they’ve even been displayed
On all those billboards and red flags
Beneath which every building sags.
Nobody sane could see the need
For harsher methods than this thick
Miasma of bad rhetoric.
The masses long ago agreed
That inner freedom makes no sense.
Which only leaves the Dissidents –

IX
Who go through several kinds of Hell
In special clinics where the drugs
That make them ill instead of well
Are forced upon them, not by thugs,
But qualified pschiatrists.
It’s one of history’s little twists:
The sane are classified insane
And rather than relieving pain
The doctors cause it. Strange, but true –
When those with preternatural guts
Are first of all defined as nuts,
Then made so – but that’s Marx for you:
To put the future beyond doubt
What must be must be brought about.

X
The common run of folk, meanwhile,
Can feel comparatively safe
From decimation Stalin-style.
Their bonds, though still strong, do not chafe
As proudly as they with one accord
March asymptotically toward
That feast of dubious delights
Zinoviev calls the Yawning Heights –
A Workers’ Paradise on Earth
Which has no use for abstract thought.
Fantastically good at sport
A new mankind has come to birth,
A race that stands a whole head taller –
Except the head’s a trifle smaller.

XI
Useless to ask what might have been
Had things stayed roughly as they were.
October 1917
Made certain nothing could occur
Save transformation. History’s tide –
Which Spengler said we have to ride
Or else go under – rain its course
With hypermetamorphic force.
Until no links were left to sever.
All ties were broken with the past.
No going back. The die was cast
And everything was changed for ever.
How strange, in that case, we should feel
Those days to be so much more real

XII
Than these. Yet really not so strange,
For nothing dates like human dreams
Of Heaven. Terrified of change,
The Russsia of the present seems
An embolism. Time forgot
To flow, and stopped, and formed a clot.
There’s next to nowt in the whole place –
Including rockets aimed at space –
That wouldn’t be there anyway
Had Lenin failed to catch his train.
Suppose he’d chosen to remain
In Zurich, who can really say
His country would not now be strong?
Perhaps he got the whole thing wrong

XIII
And simply blasted in the bud
What might have been a brilliant flower.
Perhaps in shedding so much blood
To gain unchallengeable power
He stopped what was just getting started
And left his country broken-hearted,
With what result we now all know –
The Gulag Archipelago.
Too black a thought with which to end
This letter, and besides, I’m too
Aware that I’m addressing you –
A master of the light touch. Friend,
Forgive my solemn voice of doom.
I aimed at gaiety, not gloom,

XIV
But somehow lost my mirth. Mistake.
It’s boorish to parade one’s grief
And weep for a whole country’s sake,
Assuming it’s lost all belief
In human decency. The fact
Remains that, though the deck is stacked
Against them, none the less the just
Are born and win each other’s trust.
Nadezhda Mandelstam has said
The truth still comes back from the grave
And she should know. I think I’ll waive
What rights I have to mourn the dead.
I’m better at the kind of tears
I cried when seeing Donkey’s Years.

XV
​Besides, I like it here, I’ve seen
The Peter-Paul and the Tsars’ tombs.
I’ve stared at the Bronze Horseman, been
Through all the Hermitage’s rooms.
I’ve seen the Empress Catherine’s clock –
A ten-foot wingspan gold peacock
Some Grand Duke thought the kind of gift
That might convey his general drift.
I’ve seen . . . But there seems little point,
Here in this Window on the West,
In telling you what you know best.
You’ve been here and you’ve cased the joint,
Liking to know whereof you speak.
Good principle. See you next week.