What Happened to Auden 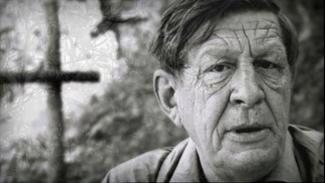 His stunning first lines burst out of the page
Like a man thrown through a windscreen. His flat drawl
Was acrid with the spirit of the age –
The spy’s last cigarette, the hungry sprawl
Of Hornby clockwork train sets in ‘O’ gauge,
Huge whitewashed slogans on a factory wall –
It was as if a spotlight when he spoke
Brilliantly pierced the histrionic smoke.

Unsentimental as the secret police,
Contemporary as a Dinky Toy,
On holiday in Iceland with MacNeice,
A flop-haired Cecil Beaton golden boy,
Auden pronounced like Pericles to Greece
The short time Europe had left to enjoy,
Yet made it sound as if impending doom
Could only ventilate the drawing room.

Splendidly poised above the ashtray’s rim,
The silver record-breaking aeroplane
For streamlined utterance could not match him.
Oblique but no more often than the rain,
Impenetrable only to the dim,
Neurotic merely not to be insane,
He seemed to make so much sense all at once
Anyone puzzled called himself a dunce.

Cricket pavilion lust looked a touch twee
Even to devotees, but on the whole,
Apart from harsh reviews in Scrutiny,
All hailed his triumph in Cassandra’s role,
Liking the chic he gave her, as if she
Wore ankle-strap high heels and a mink stole –
His ambiguity just further proof
Here was a man too proud to stand aloof.

By now, of course, we know he was in fact
As queer as a square grape, a roaring queen
Himself believing the forbidden act
Of love he made a meal of was obscene.
He could be crass and generally lacked tact.
He had no truck with personal hygiene.
The roughest trade would seldom stray to sleep.
In soiled sheets he was left alone to weep.

From the Kurfürstendamm to far Shanghai
He cruised in every sense with Isherwood.
Sadly he gave the talent the glad eye
And got out while the going was still good.
New York is where his genius went to die
Say those who disapproved, but though they could
Be right that he lost much of his allure,
Whether this meant decline is not so sure.

Compatriots who stuck it out have said
Guilt for his getaway left him unmanned,
Whereat his taproot shrivelled and went dead,
Having lost contact with its native land.
Some say it was the sharing of his bed
With the one man nobody else could stand
That did him in, since poets can’t afford
The deadly risk of conjugal concord.

But Chester made bliss hard enough to take,
And Wystan, far from pining for his roots,
Gaily tucked into the unrationed steak.
An international figure put out shoots.
Stravinsky helped the progress of the rake:
Two cultural nabobs were in cahoots.
No, Auden ageing was as much at home
On the world stage as Virgil was in Rome,

If less than salonfähig still. Regret
By all accounts he sparingly displayed
When kind acquaintances appeared upset,
Their guest rooms wrecked as if by an air raid.
He would forgive himself and soon forget.
Pig-like he revelled in the mess he made,
Indecorous the more his work lost force,
Devoid of shame. Devoured, though, by remorse,

For had he not gazed into the abyss
And found, as Nietzsche warned, that it gazed back?
His wizardry was puerile next to this.
No spark of glamour touched the railway track
That took whole populations to the hiss
Of cyanide and stoked the chimney stack
Scattering ash above a vast expanse
Of industry bereft of all romance.

The pit cooled down but still he stood aghast
At how far he had failed to state the case
With all those tricks that now seemed so half-arsed.
The inconceivable had taken place.
Waking to find his wildest dreams outclassed
He felt his tongue must share in the disgrace,
And henceforth be confined, in recompense,
To no fine phrase devoid of plain prose sense.

The bard unstrung his lyre to change his tune,
Constrained his inspiration to repent.
Dry as the wind abrading a sand dune,
A tightly drafted letter of intent,
Each rubric grew incisive like a rune,
Merest suggestions became fully meant.
The ring of truth was in the level tone
He forged to fit hard facts and praise limestone.

His later manner leaves your neck-hair flat,
Not standing up as Housman said it should
When poetry has been achieved. For that,
In old age Auden simply grew too good.
A mortal fear of talking through his hat,
A moral mission to be understood
Precisely, made him extirpate the thrill
Which, being in his gift, was his to kill.
​
He would up as a poor old fag at bay,
Beleaguered in the end as at the start
By dons appalled that he could talk all day
And not draw breath although pissed as a fart,
But deep down he had grown great, in a way
Seen seldom in the history of his art –
Whose earthly limits Auden helped define
By realizing he was not divine.
Copyright © 2019
​Built & managed  By Dawn Mancer