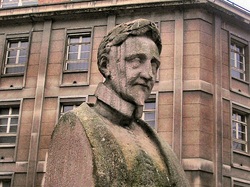 ou plutost les chanter
Recite your lines aloud, Ronsard advised,
Or, even better, sing them. Common speech
Held all the rhythmic measures that he prized
In poetry. He had much more to teach,
But first he taught that. Several poets paid
Him heed. The odd one even made the grade,
Building a pretty castle on the beach.

But on the whole it’s useless to point out
That making the thing musical is part
Of pinning down what you are on about.
The voice leads to the craft, the craft to art:
All this is patent to the gifted few
Who know, before they can, what they must do
To make the mind a spokesman for the heart.

As for the million others, they are blessed:
This is their age. Their slap-dash in demand
From all who would take fright were thought expressed
In ways that showed a hint of being planned,
They may say anything, in any way.
Why not? Why shouldn’t they? Why wouldn’t they?
Nothing to study, nothing to understand.

And yet it could be that their flight from rhyme
And reason is a technically precise
Response to the confusion of a time
When nothing, said once, merits hearing twice.
It isn’t that their deafness fails to match
The chaos. It’s the only thing they catch.
No form, no pattern. Just the rolling dice

Of idle talk. Always a blight before,
It finds a place today, fulfills a need:
As those who cannot write increase the store
Of verses fit for those who cannot read,
For those who can do both the field is clear
To meet and trade their wares, the only fear
That mutual benefit might look like greed.

It isn’t, though. It’s just the interchange
Of showpiece and attention that has been
There since the cave men took pains to arrange
Pictures of deer and bison to be seen
To best advantage in the flickering light.
Our luck is to sell tickets on the night
Only to those who might know what we mean,

And they are drawn to us by love of sound.
In the first instance, it is how we sing
That brings them in. No mystery more profound
Than how a melody soars from a string
Of syllables, and yet this much we know:
Ronsard was right to emphasise it so,
Even in his day. Now, it’s everything:

The language falls apart before our eyes,
But what it once was echoes in our ears
As poetry, whose gathered force defies
Even the drift of our declining years.
A single lilting line, a single turn
Of phrase: these always proved, at last we learn,
Life cries for joy though it must end in tears.