Nefertiti in the Flak Tower 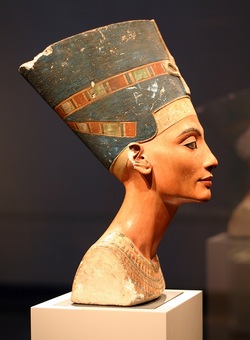 If there was one thing Egyptian Queens were used to
It was getting walled up inside a million tons
Of solid rock. Nefertiti had a taste of that
Before the painted head by which we know her –
That neck, that pretty hat, those film-star features,
The Louise Brooks of the Upper and Lower Kingdoms –
Emerged to start a tour of the museums
That finished in Berlin, almost for keeps.
It could have been the end, but for the flak tower:
With all the other treasures, she was brought there
And sat the war out barely shivering,
Deep in an armoured store-room built by slaves –
An arrangement with which she was familiar.
The guns sent up eight thousand shells a minute,
Some of them big enough to turn a whole
B-17 into a falling junk-yard,
But the mass concussion, spread through so much concrete,
Was just a rumbling tremble. In each tower
At least ten thousand quaking people sheltered,
Their papers having proved them Aryan.
When the war stopped, the towers fought one more day
Because the Russians couldn’t shoot a hole
To get in. Finally they sent an envoy.
The great Queen was brought out and rode in state
Back to her little plinth and clean glass case.
In Berlin in the spring, I cross the bridge
To the Museumsinsel just to see her
And dote on her while she gives me that look,
The look that says: “You’ve seen one tomb, you’ve seen
Them all.” For five long years the flak towers stood
Fighting the enemy armies in the sky
Whose flying chariots were as the locusts:
An age, but less than no time to Nefertiti,
Who looks as if she never heard a thing.
​
-- Standpoint, June 2009