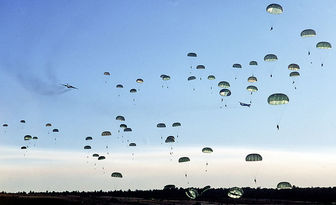 Taking the piss out of my catheter,
The near-full plastic bag bulks on my calf
As I push my I.V. tower through Addenbrooke’s
Like an Airborne soldier heading for D-day
Down the longest corridor in England.
Each man his own mule. Look at all this stuff.
Pipes, tubes, air bottles. Some of us have wheels.
Humping our gear, we’re bare-arsed warriors
Dressed to strike fear into the enemy,
But someone fires a flare. Mission aborted.
On the airfield, the chattering Dakotas
Have fallen silent. Jump postponed again.
Stay as you are. Keep your equipment on.
When cloud and wind are OK in the drop zone
We hit the sky and leap into the dark.
Meanwhile just hunker down and get some sleep.
Look on the bright side. Everyone’s still here.
The longest corridor is full of us,
Men of the Airborne going back to bed
For just one more drawn-out Walpurgisnacht.
Our urinary tracts hung up to drain
Throw amber highlights on the bare white wall
Until another dawn. The sky looks clear.
Dakotas cough when they start up, repeat
Themselves like women gossiping. But wait,
Where are the women? What do they go through?
They fly there by Lysander and get caught
Like Violette Szabo. Out there on their own.
Best not to think of it, stick with the guys
And shoot the bull about your CLL
Leukaemia that might hold off for years,
The hacking rattle of COPD
Which sounds as if it might star Dennis Franz
As Andy Sipowicz, but it turns out
To be the bug they once called emphysema.
The way I smoked, thank Christ it wasn’t cancer:
I caught one break at least. It’s dawn again.
The sky looks clear. The kit bag full of piss
Is heavy on your leg. Your name-tags itch,
The cannula inside your elbow dangles,
The patches for electrodes decorate
Your chest like Nicorettes. When you go down
Into the dark you’ll see it sliced with flak
Just as the bumping Cat Scan bangs and crackles,
As the MRI inscribes the night with fire.
My outfit one by one in the green light,
Out of the door and down into the dark
They go, and not much later in the year
I’m watching Peter jump. The flak comes up
And pulls him in. But no green light for me.
I’m home in the Dakota and the same
Long corridor leads back to bed. More stuff
To hump: Omeprazole and Doxycycline
Pills for my lungs. The medics give me leave
To be there for my daughter’s New York show.
I step ashore and wake up in Mount Sinai,
Felled by the blood clot I brought off the boat.
For ten full days and nights I lie and watch
The Gulf spill oil on CNN, which is
An oil-spill anyway, and back in England
I add syringes to my weaponry.
Bruises from Clexane like Kandinsky abstracts
Blotch me with blue and yellow and bright pink,
A waistline from the Lenbach Haus in Munich.
The women of my family watch the clock
To make sure I shoot up at the right time:
All in the timing and a simple plan.
Normandy showed, and Arnhem showed again,
The Airborne tactic was a death-trap. Crete
Fell to the German sky troops but their losses
Were too great and they never jumped again.
At Cassino and in the Hürtgen Forest
The Fallschirmjäger were brought in by truck.
Up in the air like white blooms on a pond
We’re asking for it. Borneo was waiting
For the Aussies to jump into if the Yanks
Held back the bomb. The jump postponed,
You see them now in the long corridor,
My countrymen, their incipient melanomas
Cut out and sewn up, scars like bullet holes.
You want to see mine? In the final hours
At Dien Bien Phu fresh paratroops went in
Through tracer veils as if about to land
Slap in the middle of SS Das Reich.
They’re here again. They must have been patched up:
Not one less handsome than Alain Delon
In Purple Noon, but barely half his age.
The Hitch is with them and I hear him speak
Exactly as he looked the day we met:
The automatic flak came bubbling up
Like champers, dear boy. Overrated stuff.
I watch him standing there in the green light.
It switches off. Has he come home with us?
I can’t see. I just see the corridor
And my white room. Another night alive
To lie awake and rue the blasphemy
By which I take their deaths as mine, the young
Soldiers of long ago, in the first years
Of my full span, who went down through the dark
With no lives to look back on. Their poor mothers.
Where are the women? Nurse, my bag is broken.
Sorry, it’s everywhere. She mops, I cough,
She brings the nebulizer and I sit
Exhaling fog. Dakotas starting up
Make whirlpools in the ground mist. Too much luck,
Just to have lived so long when I unfold
And shuffle forward to go out and down
The steep, dark, helter-skelter laundry chute
Into that swamp of blinking crocodiles
Men call Shit Creek. Come, let us kiss and part.