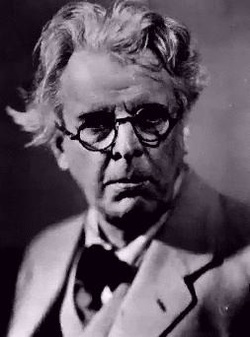 ​Where he sought symbols, we, for him, must seek
A metaphor, lest mere praise should fall short
Of how the poems of his last years set
Our standards for the speech that brings the real
To integrated order dearly bought,
Catching the way complexity would speak
If it had one voice. This, he makes us feel,
Is where all deeper meanings are well met,
Contained in a majestic vessel made
Out of the sea it sails on, yet so strong
We never, watching it our whole lives long,
Doubt its solidity. All else may fade,
But this stands out as if it had been sent
To prove it can have no equivalent.

Even his first things were wind-driven boats.
A coracle would have its speed enhanced
By some queen elf who stood with gauze shift spread,
Materialising from the twilight mist.
Slim dhows, as his romantic urge advanced,
Sliced through the East. A little navy floats
In his early pages. Sleek sloops joined the list
When more substantial things asked to be said.
His wild-swan racing schooners heeled and ran
Cargo from Athens, Bethlehem and Rome,
Or the body of an Irish airman home
Across the gale. The full soul of a man
Was on display: sound craft of trim outline
Criss-crossed the billows. All of his design,

These would have been enough to make him great:
The caravelles that reached Byzantium
Alone proved him unmatched. Then, at the heart
Of this flotilla, as if light were haze,
Something appeared to strike the viewer dumb:
A huge three-decker fighting ship of state.
Acres of air caught in her tiered arrays
Of raw silk, she made clear, in every part,
All of her million parts were cleanly wrought
To fit together with no need of nails.
From gun-decks upward to top-gallant sails
She was one artefact, a cloud drawn taut
By force, so far beyond its builder’s mind
It felt for him, and saw where he was blind.

Tea-clipper-tall but at the waterline
Three times the width, she had the looks to quell
Resistance instantly by show of might:
Empires would knuckle under. Ireland
Itself would kneel to see her breast the swell
With such bulk. But develop and refine
This image as we may, and as we planned –
Down to the shining brass, sheets chalky white,
Glazed lanterns, mullioned windows, oaken rails –
It will not serve the turn without a sense
Of brute strength tempered by benevolence.
The monarch reigns supreme because her sails,
From cinquecento chapel walls low down
On up through salon panels to her crown

Of screens, woodcuts and painted fans, are all
Unchallenged masterpieces. Her curved hull
Was moulded by the cave walls of Lascaux
And stamped with its motifs. But what we hear,
Not what we see, confirms the miracle
And makes the metaphor. We’re held in thrall
By music. Music lush, music austere,
All music ever heart-felt, holds the flow
Of splendour in one place. Not thought alone –
Thought least of all, because it was his fate
To grow more infantile as it grew late –
Could build this thing, nor was it cut and sewn
Or hewn solely by touch, or sealed by skill.
A feat of the self-sacrificing will,

The peaceful man of war is here to prove
Any attempt to emulate her air
Of grandeur invites ridicule, unless
We, too, pour everything into the task
Of building something that will still be there
When we are gone. And that means all we love
And more, as Yeats knew when he wore a mask
To quell the self, thinking its pettiness
Could be faced down. It can’t, but it can be
Tapped and diverted to an empty space
Where something permanent can take its place,
Shaped for the voyage to eternity
Out of our tears of weakness at the way
The thing we mean means more than we can say.

Worse than absurd, then –witless, in the end –
To trace him through his visionary schemes
And systems, or pay grave attention to
Those last affairs, boosted by monkey glands,
His patient wife scorned as a dotard’s dreams
If more unreal. No scholarship can mend
The error of not seeing all demands
For human truth are vain. Few things are true
About the life except the work. Yeats found
His final glory when his jade and gold
Were joined by rag and bones to sink and fold
Into the flux of images and sound
That formed a magic ship to win the war
Against time, which is just a metaphor

For the battle to make sense of growing old,
And bless the ebb tide. It is outward bound,
Fit for the launch of what we have to give
The future, though that be a paltry thing.
Our house is flooded and our books are drowned,
The embers of our passion are stone cold,
We count the minutes we have left to live,
Yet even now it is of love we sing,
And for a paragon we have the vast
Swan-songs of Yeats that brought his depths to light.
Among school children or on All Soul’s Night,
Humble or proud, he saved the best for last
And gave it to the waves – but no. There is
No ship. Just words, and all of them are his.