And Then They Dream of Love 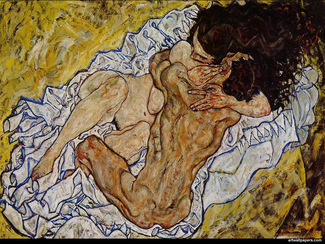 “Were you not more than just a pretty face
And perfect figure”, he thought, kissing one
While clamped against the other, “this embrace
Would not be so intense.” But she was done
For now with doubts and fears. Her state of grace
Had come upon her like the rising sun.
He bathed in daybreak, loving its suddenness,
The way she shook, her look of sheer distress
That meant the opposite, and everything.

Back in the world, her limbs still trembling,
She said it all again, and this time he
Expressed himself in words as best he could –
“You must know you mean more than this to me” –
Merely to find himself misunderstood.
“You mean you don’t get lost in ecstasy
The way I do?” she said. “I want to be
All that you need of this.” He said, “You said
I only cared what you were like in bed.”
And so their bickering began again

About what you mean now and I meant then.
Only so long could they go on that way
Before they parted, worn out by their knack
For petty quarrels even when they lay
Replete. The things they said before came back
To plague them. If it matters what you say
It can’t last. Best to take another tack,
And meet for just this, very late at night.
Would she do that? No. He would. She was right.
-- Standpoint, January/February 2010