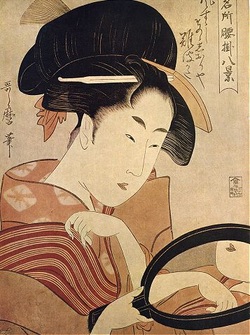 Beside the uniquely hideous GLC building
On a nasty September day
With a chill in the air and rain just starting to spit,
The Japanese couple, only this minute married,
Have come to be photographed,
The Thames in the background looking as deadly dull
As ditchwater by Dickens. Bill Sykes
Was lucky to get himself hanged
Half a mile downriver from here.
When the sun goes in, it makes falling out of a window
Seem like the thing to do. But just look
At the bride. No, not at the groom, whose suit
Would be a black-tie outfit if not in white
With trimmings a duck-egg blue, the shirt all frills
Like Tommy Steele playing Liberace’s houseboy.
I mean look at her. Inside that three-tier cake
Of a dress is a model for Utamaro.
Do they have another ceremony at home
With all the traditional rigour?
And is it a gaijin flaunting his arrogance
To wish her lifted out of this concrete mess
And taken home by JAL to the rooms of paper,
The laths of wood and the properly arranged flowers,
With kimono and her hair pinned up to frame
The fresh snow of her beauty?
Look at the line of her cheek as once the painter
Would have looked at it in the Floating World
When he spoke to her with the reverence of a duke
To the Lady Murasaki.
Ah, Butterfly, you have failed to understand.
You must not come to us. We must come to you.