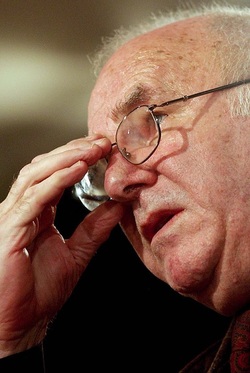 In the early evening, before I go on in Taunton,
I’m outside the stage door for a last gasp.
Two spires, one Norman, share the summer sky
With a pale frayed tissue wisp of cirrostratus
And the moon, chipped like the milky white glass marble
I kept separate for a whole week and then ruined
By using as a taw.

I have never been here before,
So where does this strong visual echo come from?
Concentrate. Smoke harder. And then I get it:
Cape Kennedy, the rocket park in the boondocks.
A Redstone and a Jupiter stuck up
Through clear blue air with a cloud scrap just like this one,
And the moon in the same phase.

The rockets, posing for the tourist’s gaze,
Were the small-time ancestors of Saturn V,
But so were these spires. It’s a longer story
Than the thirty years I just felt shrink to nothing.
Time to go in, get rigged with the lapel mike –
Its furry bobble like a soft black marble –
And feel the lectern shaking while I set
Course for the Sea of Shadows.