A Bracelet for Geoffrey Hill 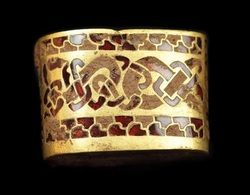 ​A standard day’s haul from the burial mound:
Quartz cat’s eye cuff-links for a chain-mail shirt,
A Stalin button and an Iron Cross.
Small treasures liberated from their dirt.

Elsewhere in Mercia, a king prepared
For death took off his belt and doe-skin shoes,
Unzipped his lap-top, cleared security
And in the lounge sat back to watch the news

Until his flight was called. The galaxies
That showed up in the Hubble Deep Field frame
On long exposure shine like pick’n’mix
Sweets in their coloured shapes, no two the same.

Thus thrives the densely wrought. The cloth departs
And leaves the cinch more complex on its own:
An all-star inscape spinning precious wheels
In lattices of bronze, gold, pearl and bone.

Subrius Falvus, Tribune, last to die
When the plot to topple Nero came to naught,
Knelt by the grave that had been dug for him
And saw it was too shallow and too short.

Ne hoc quidem ex disciplina. So
He speaks in Tacitus. “No discipline
Even in this.” When stripping a Bren gun
Brush clean the butt-plate for the firing pin.

Coherent multiplicity takes force
For which the reader must be made to care
By how it sounds, or else it’s just white noise.
The symphony that lovely women wear

Next to the skin gains weight when taken off
And folded flat with tissues in between.
From tight arrangements we deduce the role
That each part plays, if not what it must mean.

We only know that here the heat contained
Speaks volumes about what was seen and felt
And still astonishes, more now than then –
Before the buckle came loose from the belt.

The word-lord, fresh in from America,
Lectures in Oxford. He knows everything.
Note-taking Helen shivers at the thought
She’ll be outlived by her engagement ring.