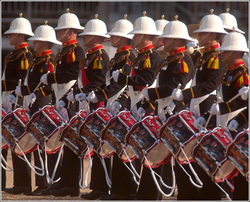 Some marched, some sailed, some flew to join the war,
And not a few were brought home on their shields.
My heart is with those voiceless ones. They were
The harvest of the broken-hearted fields,
And I drew fortune from their bitter lack
Of any luck. Silent, my father stands
Before me now, as if he had come back,
While this lament, whose beauty never ends,
Not even with its final grandeur, casts
Its nets of melody to hold me still
Beneath his empty eyes. How long it lasts,
That spell, though it is just a little while.
Then he is gone again. The world returns:
Babylon, where the Tower of Babel burns.