Message from the Moon 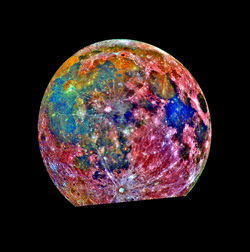 Ming fruit dish, swirling Jackson Pollock tondo
From Wedgwood, just because you’re so much bigger
Than I am, don’t you lord it over me,
The frail outrigger for your fat canoe.
My seas are dead but I control your tides
And stir your women on a monthly basis
To their blood sacrifice. It isn’t you
That liquefies them for their absent lovers,
Churns their insides, puts highlights in their faces
On hot nights where the sun no longer lingers.
With my lost air to breathe they lie bereft,
Touching themselves for hours beneath thin covers
As I lean down to them and pull them open
Like little oceans I can close at will.
You think them satisfied but I know better.
Those men you sent me were too small to feel:
A pin-prick when they came, and when they left
One tiny splash of fire I hardly noticed
While they went home tin heroes. Next time send me
Someone who’s known me since she was a girl.
​
-- London Library Magazine, Summer 2009