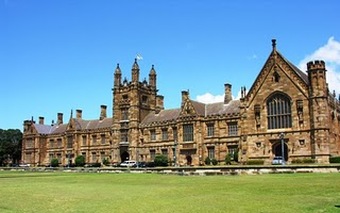 ​I see it now, the truth of what we were
Back then when we were young and Sydney shone
Like a classic silver milk-shake canister
Trapping the sunlight in a cyclotron
Of dented brilliance. In our student kit
We were dandies. We just didn’t look like it.

This year I almost died. Propped up in bed
I went back to that time and saw them all,
Even the ones who are already dead.
In the cloisters, encamped on the stone wall
Outside the library staircase, we cracked wise
As pretty girls went by, their shining eyes

Lit up, we fancied, by the flash word-play
Of drawling fops who didn’t look the part.
But that was what our dress-sense had to say:
Farewell to choking collars. Hail the start
Of dressing down to suit the heat and light.
It took thought, though, You had to get it right.

We wore the first T-shirts. The desert boots,
The lightweight army surplus khaki drills –
These were our standard gear, the business suits
Of young men with no business. How it fills
My mind with longing now, the memory
Of lurking off with endless energy

To read the poets – seldom on the course –
To write a poem – never quite resolved –
To be removed from Manning House by force –
It was where the women were – to be involved
Completely – never fear what might befall –
In the task of doing nothing much at all.

For some, that task became their whole career,
But even they lived better for the style
We forged then over reservoirs of beer
With leave to sit around and talk awhile--
Well, talk forever. So the time slid by
Into a lifetime. Who can wonder why?

And as for those who burned to make a mark,
We made it with the tongue we mastered where
It felt like daylight even after dark,
So soothing was the heat, so sweet the air:
The perfect atmosphere for epigrams
To flaunt their filigree like toast-rack trams.

To see the harbour glittering in the sun
Like fields of diamonds and the squall arrive
Across the water sudden as a gun
Was bound to bring the optic nerve alive
Searching for words, and we who wrote them down
Might not have looked it, but we owned the town.

For nothing rules like easy eloquence
Tied to the facts yet taking off at will
Into the heady realms of common sense
Condensed and energised by verbal skill:
It has no need to check before a glass
The swerve of a frock coat around its arse.

Already ugly and with worse to come
Yet lovely in its setting past belief,
The city got into our speech. Though some
Were burdened by their gift and came to grief,
And some found fortune but as restless men,
We were dandies. We just didn’t see it then.