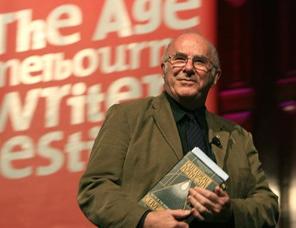 ﻿​Some older people like the ship so much
They pay again and go wherever it goes –
Which means that for a large part of the year
They just steam back and forth across the Atlantic –
Until they die, while other older people
Are there for one performance after another
Of The Sound of Music. They know every word.
“How” they smile wryly as they sing along,
“Do you solve a problem like Maria?” If
They conk out before the interval, are they
Removed? Surely the mark of the habitués
Is that they’re dead already. When I noticed
That my club was full of men who had become
Stuffed armchairs and oak tables for school food
I resigned to save my skin. They liked the place
Too much. They thought the ship’s Entertainment
Officer was entertaining. They were dewy-eyed
Instead of loud with scorn when Liesl’s suitor
Expressed in terms of chaste and tender love
His youthful urge to get into her pants.
Dull death, the minimum of information –
Where entropy, to steal a phrase from S.J.
Perelman, fills every nook of Granny –
Will come when it will come, but while we’re waiting
Beware the lapse into familiar comfort,
All outlines softened. In that cloud lies proof
Your life was lost on you, though I suppose
It isn’t only easier but better
To echo an ecstatic singing nun –
Transfigured like Bernini’s St Teresa
At the mere prospect of an edelweiss –
Than to puzzle out the dialogue of, say,
Act I, Scene IV of Cymbeline, which no-one
Has remotely, since the day that it was written,
Enjoyed or even partly understood.
And are there no more thrills? In the fjord
The wrinklies crowd the rail to hear their voices
Come back from walls of ice. Couples hold hands.
So quick to guess their last heat is long gone,
How sure are we the failing is not ours,
Our cold contempt a portent of the void
Which is the closed heart and begins within us?
It doesn’t always take time to go nowhere.