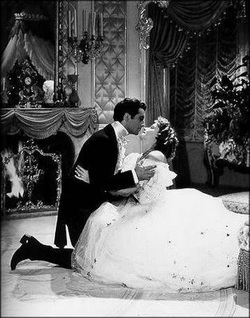 ﻿​First subject, The Bank Dick.
In the New Old Lompoc House
Fields crosses the lobby twice with the inspector.
It means the inspector fell out of the upstairs window.
In a silent film, a title would have said so:
A sound film can say it without words.

There can be word-play even in the desecration
Of an enemy’s severed head.
Fulvia shoved a pin through Cicero’s tongue.
What she meant was: “Where are your gibes now?”
It would have sounded better than that in Latin,
But the gesture was better still.

Harry Lime’s face shifts into the light
Like the Christ of Michelangelo
Floating upward from the tomb.
Resurrection, apparition, revelation
Are among the words not used:
Nor are they by Verrocchio’s St Thomas.

Garbo’s Camille has drawled “Armand Duval,
Where are my marrons glacés?”
While still we’re stunned at what she didn’t say
When she turned to look at him:
She fluttered, speaking only to the eyes.
Her Queen Christina came from Samothrace.

At the luncheon on the grass
The naked woman says without a word
What must be burning in those cool men’s minds,
Though the one in the white trousers might be thinking
“Sweet kid, but these green stains are going to need
Detergents that do not yet exist.”

In the same way that Fields locked off the viewpoint,
The camera stays on the car
While Basil Fawlty goes to get the branch
He will beat it to death with.
No words, not even pictures of a word:
Wittgenstein, move over.

He did, the day he generously conceded,
When faced with Sraffa’s Neapolitan gesture,
That its tacit content blew holes in the premise
Of the Tractatus Logico-Philosophicus.
A whole position had gone phut
Like the Great Dictator’s globe.

Speaking of which, A Bullet in the Ballet
Is a great title, but you have to see it,
Because there is a letter you don’t say.
See it, and you’ve got it to a “t”.
Tell you what, let’s just quit fooling around
And screw each other instead,

As Antony said to Cleopatra
At their last bal masqué in Alexandria.
Were the lyre, the lute, the sistra and kithara
Ever as gorgeous as what we’ve both just heard?
Sorry I couldn’t do that last bit better,
But thank you, it was lovely and so are you.