Pennies for the Shark 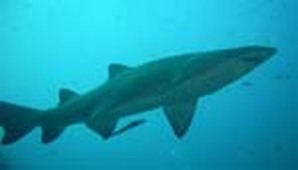 Taronga Park Aquarium once had,
When I was very young, a basement pool
Inside a mocked-up sandstone cave. A sad
Collection of big fish would, as a rule,
Just steam around it slowly till the bell
Rang for their feeding time. They didn’t eat
Each other, which was strange, but just as well:
They’d had more than their fair share of defeat.

The giant rays, like blankets on patrol,
Deferred to one thing only, the Grey Nurse:
The lone shark, coloured between coke and coal,
Whose very outline spelled death like a hearse,
She was the reason that the pennies lay
So thick on the pool’s floor. People would chuck
One down. It slid off, if it hit a ray,
But if it hit the shark it sometimes stuck.

As I recall, the coins in the shark’s back
Were flush or even countersunk like screws.
New coins would glint but old ones turning black
Still made their little circle. The real news,
However, was about the ones that hit
The pectoral fins and stayed put: battle scars
In a fighter’s wings, or code meant to transmit
Some foreign curse, like messages from Mars,

To pay the shark back for the pain she might
Have caused had she been free to roam at will
And find fish hiding in the reef at night,
Or humans in the surf. Licensed to kill,
She was a draw because she was a threat,
And would have shown you, had you fallen in,
The last thing she was likely to forget
Was how to deal with your white, gleaming skin.

No doubt they cleaned the pool out once a week
And picked bad pennies gently from the beast.
For what she said, she didn’t need to speak,
And every year her pulling power increased.
She had to be looked after. You might think
That by the standards of today her life
Was torture, but the way she didn’t blink
Told us the femme fatale lived by the knife.

Nevertheless I sympathized. Aware
In some vague way that nature suffered through
This notion that an animal could bear
Its prison if the roof was painted blue,
I tossed half-hearted pennies from the rail
Suspecting that she might be sick of things,
That shark, in slow pursuit of her own tail,
Pock-marked with pictures of the British kings.
-- Quadrant, December 2010