A City with Green Fingers 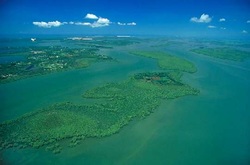 for Professor Helen Armstrong
Green fingers ought to reach from land to sea
When Brisbane is two hundred old miles long,
And punctuate its continuity
Like breathing spaces built into a song --
Lest glass and concrete irretrievably
Convert a whole coastline into Hong Kong:
This you convinced me of, one fine spring day,
As we stood at the edge of Moreton Bay.

You drove me through the fields of sugar cane:
One house per hill, one little hill per mile.
Developers would see a land in pain
Aching to be a sea of brick and tile.
I still thought, though it went against the grain,
Less greedy planners with a sense of style
Might do their best as they did what they must.
What else can suburbs eat but the earth’s crust?

The car ran out of road at the bay shore.
There was a jetty, pilings, a few boats,
A single single-storey general store
With cakes and ice-cream, sinkers and cork floats --
At first I thought there might be nothing more
But found, among my hasty mental notes,
A startling fact. On every piling stood
A pelican as if carved out of wood.

I’d barely asked “Are they alive, those things?“
When the whole flock prepared itself for flight.
Posing girl gymnasts, they uncranked their wings
And took off all at once as if to fight
The Luftwaffe. We watched them running rings
Around the sky before they dived to bite
The water like ditch-diggers. For the fish,
Not quite, perhaps, the finish they would wish:

Nevertheless, here was the world we made
Unmade to what it always might have been
If the first men had failed to make the grade
And died off leaving the whole pristine scene
Intact. A never-never everglade,
It reacquainted me with blue and green
As primary colours. “Children should see this,”
I said, and you said, “This is what we miss.”

We miss it most, of course, the less aware
We are of what was bound to be destroyed
By our urge to create. Raised in the glare
Of artificial light, we treat the void
Within ourselves as if it wasn’t there.
We’re pleased, if not exactly overjoyed,
When cities grow to prove us, too, a force
Of nature infinite in its resource.

Nor do our modern Babylons and Troys
Always rate nought on the aesthetic scale.
Night-time New York’s a song that never cloys
By Gershwin, and does Paris ever fail
To bring the rapture of unwrapping toys
At Christmas back to mind? It’s a false trail,
However, to think one man, in advance,
Can replicate the play of time and chance.

And even he, the dreaming genius
Of new Brasilias and Chandigarhs --
Computer diagrams that dazzle us
Like science-fiction schemes to join the stars,
With neon tunnels for the shuttle-bus
And looping freeways for electric cars --
Will throw in the odd pikelet of green park
To make his stunning project look less stark.

He should take his own hint, and leave the view
Open for good long stretches to the tide
So that his exponential spanking new
Brainchild can lie unseen on either side
While people rest from know-how and can-do
And the upthrust output of their vaulting pride
By contemplating how the world of men
Came from this, and might come to this again.

​Green fingers of a giant, generous hand
Spread and extended to the thundering beach.
Green fingers stretching from a hinterland
Too far back for the outer works to reach
Of the self-besieging city. Surf and sand
Open to all by right. The things you teach
Will help keep hope alive when we are gone,
Helen. Your quest is good. May it go on.