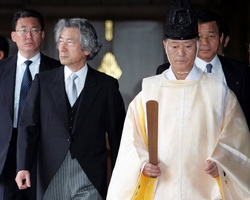 An Oka kamikaze rocket bomb
Sits in the vestibule, its rising sun
Ablaze with pride.
Names of the fallen are on CD-rom.
The war might have been lost. The peace was won:
A resurrection after suicide.

​For once I feel the urge to send my thoughts
Your way, as I suppose these people do.
I see the tide
Come in on Papua. Their troop transports,
The beach, our hospital. Over to you:
Why was one little miracle denied?

After they made our nurses wade waist deep
They picked their targets and they shot them all.
The waves ran red.
Somehow this is a memory I keep.
I hear the lost cries of the last to fall
As if I, too, had been among the dead.

Those same troops fought south to the Golden Stairs,
Where they were stopped. They starved, and finally
The last few fed
On corpses. And the victory would be theirs
If I were glad? That’s what you’re telling me?
It would have been in vain that your son bled?

But wasn’t it? What were you thinking when
Our daughters died? You couldn’t interfere,
I hear you say.
That must mean that you never can. Well, then,
At least I know now that no prayers from here
Have ever made much difference either way,

And therefore we weren’t fighting you as well.
Old people here saw the Missouri loom
Out in the bay
And thought the end had come. They couldn’t tell
That the alternative to certain doom
Would be pachinko and the cash to play

A game of chance, all day and every day.
In that bright shrine you really do preside.
What you have said
Comes true. The DOW is down on the Nikkei.
The royal baby takes a buggy ride.
The last war criminal will die in bed.
(Australian Book Review, August 2005)