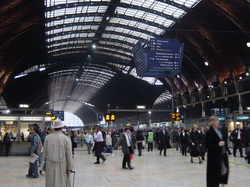 He was my age, and she my daughter’s age:
Perhaps younger than that. I saw them kiss.
She turned and left him at the barrier.
He loitered there to watch her walk away
Along the platform. Keeping them both in sight,
I watched him watching her, until she turned
Again, and looked back. Then I knew for sure
They had made love last night. If otherwise,
His raised hand would have had much more to say,
And hers, too. They exchanged acknowledgment
Only of time: this time, next time. They were
Together, though apart. I saw it all.
It was early in the morning. He went home
And she went home. Why didn’t he go with her?
Clearly because he couldn’t. My own train
Waited to take me far into the West,
To slightly warmer weather, and the hall
Where I would read my poems about loss,
Having lost nothing since the last blue moon
To touch what I’d just seen. Alone for good
Is not the same thing as alone for now,
Nor she who won’t return as she who will --
Departing only to appear again,
Filling the outline of a memory
Until the real farewell, when the tears fall,
And her not being there is always there.
(Meanjin, Vol. 64 No. 3, 2005)