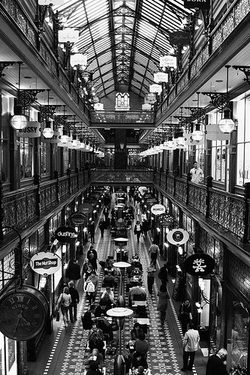 The Sioux, believing ponies should be pintos,
Painted the ones that weren't.
When they saw the Iron Horse
They must have wondered why the palefaces
Left it a palimpsest.
Bruno Schulz said an artist must mature
But only into childhood.
He called our first perceptions
The iron capital of the adult brain.
I would like to think my latest marquetry
Was underpinned by Debussy's Images
Or the chain of micro-essays
In Adorno's Minima moralia,
But a more likely progenitor
Entered my head right here in Sydney:
The first aesthetic thrill that I remember.
In a Strand Arcade display case
A tiny but fine-detailed model train
Ran endlessly around a plaster landscape.
On tip-toe, looking through the panorama
Rather than down on it, I formed or fed
Lasting ideals of mimesis, precision
And the consonance of closely fitted parts
Combined into a work that had coherence
Beyond its inseparable workings.
Later, at the flicks, when the Iron Horse
Was attacked by yelping braves,
I heard their hoof-beats on a marble floor,
And later still, having read about steam power
In my Modern Marvels Encyclopaedia,
When I realised the little train
Had been pulled by an illusionary loco --
Directly turned by an electric motor,
The wheels propelled the rods and not vice versa --
My seeing through the trick only increased
The recollection of intensity,
Immensity compressed into a bubble,
The macrosphere in miniature.
But mere shrinkage didn't work the magic:
There had to be that complicated movement
Of intricate articulation
As in an aero-engine like the Merlin
Or the H-form Napier Sabre.
In the Hermitage, a Fabergé toy train
Was not so precious, didn't even go,
Was hopelessly disfigured by its jewels.
It left me with pursed lips and shaking head,
Surprised they even bothered
And full of pity for the royal children
Deceived by their bonanza every Christmas --
A wampum headband set with amethysts,
A solid silver tomahawk --
Into equating workmanship with wealth.
Full of boutiques that try to do the same,
The Strand Arcade is still there,
Commendably preserved if over-polished,
But the train is gone for good --
Except where, in my mind,
Forever turning back and yet forever
Continuing its tour d'horizon
Of a world threatened by a race of giants,
It snickers behind the glass
I stained with the acid of my fingertips.