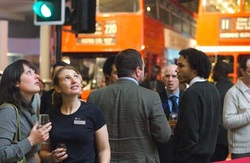 Young ladies beautiful as novelists
Were handing out the nibbles and the drinks.
Butch writers with bald heads and hairy wrists
Exchanged raised eyebrows, nudges, knowing winks,
Hints broader than their beams.
The tall dark knockout who prowled like a lynx
With the chicken satay cooled the optimists --
Her polite smile said "as if" and "in your dreams".

One writer never sought her violet eyes.
He concentrated on the parquet floor.
Ungainly yet of no impressive size,
Lacking in social skills, licensed to bore,
He was the kind of bloke
A girl like her would normally ignore,
Unless, of course, he'd won the Booker Prize.
Alas, he had. I can't think of a joke --

Only of how she lingered there until
He woke up to the full force of her looks;
Of how we rippled with a jealous thrill,
All those of us who'd also written books
Out of an inner need;
And now a panel-game of hacks and crooks
Had staked him out for her to stalk and kill --
As if the man could write, and she could read.

They live in Docklands now: a top-floor flat
They can see France from. Yes, they live there, too:
A house in the Dordogne . Stuff like that
I honestly don't care about, do you?
But then I see her face
Beside his in the papers. Strange, but true --
Blind chance that picked his fame out of a hat
Had perfect vision when it gave him grace.

My new book's hopeless and I'm getting fat.