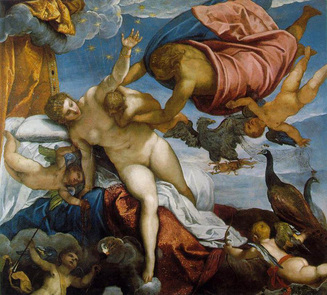 Always the Gods learned more from humankind
Than vice versa. So it was bound to be:
It takes a troubled heart to make a mind.
Stuck with their beautiful stupidity,

The Gods were peeved to find themselves outclassed
Even in pleasure, which was their best thing.
Sky-walking Zeus, the Bright One, was aghast
To find that men could laugh and weep and sing

For love, instead of merely chasing tail
The way he did when he came down to earth:
Driving his lightning bolt in like a nail,
Shouting the place down with unsubtle mirth.

Sometimes he stole earth-men's identities.
Sly conjugations in a borrowed face
Drew some applause for his raw power to please,
But none at all for foreplay, tact or grace.

By Jove! By Jupiter! He heard the names
Men gave him change. The world grew less impressed
Than he was with his simple fun and games,
The gold medallions on his hairy chest.

Back in the clouds, he brooded for as long
As Gods can. If he couldn’t have the tears
Of mortals, he could copy a love song.
To learn one took him several hundred years,

But time, like sorrow, doesn’t count up there.
He got quite good at it, and now he sings
Sinatra standards that sound pretty fair
Against a backing track complete with strings.

Virgin Minerva, born out of his brain
To stave off Vulcan with a single slap,
Borrowed more fetching versions of disdain
Better designed to milk the thunderclap

Of lust. Her heavenly suitors pay for shoes
She might wear only once, or not at all.
Pretending they know how it feels to lose,
Prospective lovers, outside in the hall,

Compare TAG-Heuer watches while they scuff
Their Gucci loafers on the marble floor.
In love, real men have taught them, things get rough:
A show of grief might get you through her door.

Inside, she lies back on her Zsa-Zsa pink
Chaise longue while Aphrodite dishes dirt.
Feigning to taste the whisky sours they drink,
They smile as if a memory could hurt.

Does Atlas need those Terminator shades?
Poseidon’s wet-suit, what good does it do?
Is gold-crowned Phoebe on her roller blades
Really as cute as when the world was new?

And here comes Hera in her Britney kit,
And there goes Hermes on his superbike.
The stuff they have! You wouldn’t credit it,
And all top of the range. What are they like?

Like us, without the creativity
Stirred by the guilt that hangs around our necks.
Their only care the void of their carefree
Millennia of unprotected sex,

Uncomprehendingly they quote our books.
Their gull-wing sports cars and their Gulfstream jets,
The bling-bling wasted on their perfect looks --
It’s all ours. Gleaming as their long sun sets,

The Gods are gaudy tatters of a plan
Hatched by our ancestors to render fate
More bearable. They end as they began,
Belittled in our thoughts that made them great.