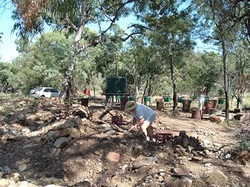 I swam across the creek at Inverell.
The guard of jacarandas bled their blue
Into the water. I recall it well,
But partly I do that because of you.

​I was a city boy. A country trip
Was rare, and so the memories were sparse.
I helped to plait a cracker for a whip,
But when I swung the thing it was a farce.

At Tingha, where they used to mine the tin,
I searched for sapphires all day and found none.
I briefly rode a horse and barked my shin
When I got off, and couldn’t stand the sun

That bleached the fence-rails to a dry, pale grey
A hundred years before and there they were,
Just looking wooden and what can you say?
Sit on a stump and blink into the blur.

I had been long away when I looked back
Through your books and at last saw what I’d seen:
The blue-tongue in the gum beside the track,
The headless black snake limp as Plasticine.

The snake was in a trench they called a race.
Somebody threw it there when it was dead.
Now I remember how fear froze my face
When, further on, I found its yawning head.

The country built the city: now I know.
Like it or not, it got to even me,
And not just through the Royal Easter Show,
But the hard yakka of its poetry.

Now I can hear the shouts of the young men
Out after rabbits with a .22.
I wasn’t there long, but I’m there again,
Collecting trinkets as the magpies do.

It’s part of me, and partly because of you.
(from Letters to Les, edited by Donata Carrazza and Paul Kane, Mildura, 2005)