﻿Diamond Pens of the Bus Vandals 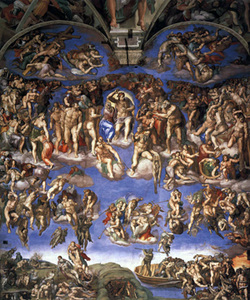 Where do bus vandals get their diamond pens
That fill each upstairs window with a cloud
Of shuffled etchings? Patience does them proud.
Think of Spinoza when he ground a lens.

A fog in London used to be outside
The bus, which had to crawl until it cleared.
Now it’s as if the world had disappeared
In shining smoke however far you ride.

You could call this a breakthrough, of a sort.
These storms of brilliance, light as the new dark,
Disturb and question like a pickled shark:
Conceptual art free from the bonds of thought,

And wasn’t Michelangelo, deep down,
Compelled to sling paint by an empty space,
Some ceiling he could thoroughly deface?
The same for Raphael. When those boys hit town

Few of its walls were safe. One cave in France
Has borne for almost forty thousand years
Pictures of bison and small men with spears --
Blank surfaces have never stood a chance

​Against the human impulse to express
The self. All those initials on the glass
Remind you, as you clutch your Freedom Pass,
It’s a long journey from the wilderness.