The Serpent Beguiled Me 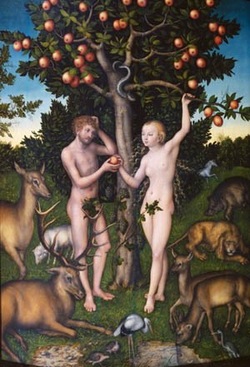 Following Eve, you look for apple cores
Along the riverbank, tossed in the mud.
Following Adam down long corridors,
You swing your torch to look for spit and blood.

He got his chest condition when he learned
Contentment made her curious. He thought
He was enough for her, and what he earned
Would keep her pinned while he played covert sport.

Alas, not so. She claimed that privilege too,
And even, under wraps, nursed the same pride
In taking satiation as her due --
A cue to call herself dissatisfied.

That rate of change was coded by the tree
Into the fruit. The instant thrill of sin
Turned sweet release to bitter urgency:
His fig leaf was flicked off, and hers sucked in.

From that day forth, the syrup she gave down
Smacked of the knowledge that she felt no shame.
The modesty for which she won renown
Was feigned to keep her freedom free of blame.

There was a time when, if he had not worn
Her out, she would have lain awake and wept.
Why was the truth, we ask, so slow to dawn?
He should have guessed it from how well she slept.

And when she turned to him, as she did still,
Though the old compulsion was no longer there,
The readiness with which she drank her fill
Told him in vain her fancy lay elsewhere.

He never faced the fact until she went.
He tracked her down and asked her what was wrong.
For once she said exactly what she meant:
“It was perfect. It just went on too long.”